FCC to Authorize Another 1700 MHz of New Millimeter Wave Spectrum

You can credit Moore’s Law for allowing commercial use of millimeter wave communications in the mass markets, bringing an order of magnitude (10 times) to two orders of magnitude (100 times) more usable mobile and fixed wireless capacity to the U.S. market.

But there are many other implications. So much new spectrum is coming, and so much unlicensed spectrum will be made available, that the economics of the access business will change.


The huge trove of new capacity, dwarfing all present mobile and Wi-Fi spectrum, will reshape the economics of the access business, allowing new competitors and business models to arise, revaluing spectrum licenses, enabling fixed wireless to compete with fixed networks and positioning mobile networks as full product substitutes for  fixed networks for the first time.


The additional 1700 Megahertz of high-band spectrum will be made available in the 24 GHz and 47 GHz bands.


As part of its Spectrum Frontiers initiative, the FCC already had started work to release new spectrum in the 28 GHz, 37 GHz, 39 GHz and 64 GHz to 71 GHz bands.


In the 28 GHz band, two 425 MHz spectrum blocks will be available, on a nationwide basis.


That 14 GHz band will be 15 times as much as all unlicensed Wi-Fi spectrum in the lower bands.

37% of Comcast Customers Buy 3 or 4 Products

One set of numbers from the Comcast third quarter 2017 results is instructive: Comcast details the number of customers taking single, dual-product and three-product or four-product packages.


That matters for revenue, as a buyer of multiple products produces more revenue than an account purchasing just a single product, all other things being equal (such as the unit price of each type of product).


More significantly, purchases of bundles determine the viability of the business case itself.


Stranded assets are big problems in highly-competitive fixed network markets. Assume a typical local market where the local telco and the local cable operator are equally skilled, but where cable has an advantage in the internet access and sometimes video product segments.


Assume a typical market share structure has the cable operator getting about 60 percent market share, while the telco gets about 40 percent.


But multiple service purchases effectively boost revenue as much as having more accounts in service. In other words, selling more things to fewer customers can produce as much revenue as selling one product to nearly every location.


And that is why take rates for multiple-product bundles matter so much: business models that would fail in a single-product environment  can work, even at significantly-lower rates of customer adoption.

Advanced Technology is Indistinguishable From Magic

That happened with electricity, computing, the internal combustion engine, steam power, railroads, automobiles, the domestication of plants and animals, the wheel, writing, printing and mass production, none of which is generally considered to be advanced technology in the same sense as artificial technology now is viewed.

One normally hears artificial intelligence mentioned as one of three forms of machine learning, with deep learning and neural networks often said to be more-intense forms of AI, where machines learn on their own, without direct and specific programming by humans, or where computers are able to recognize new patterns on an unsupervised basis, creating new rules based on those insights. 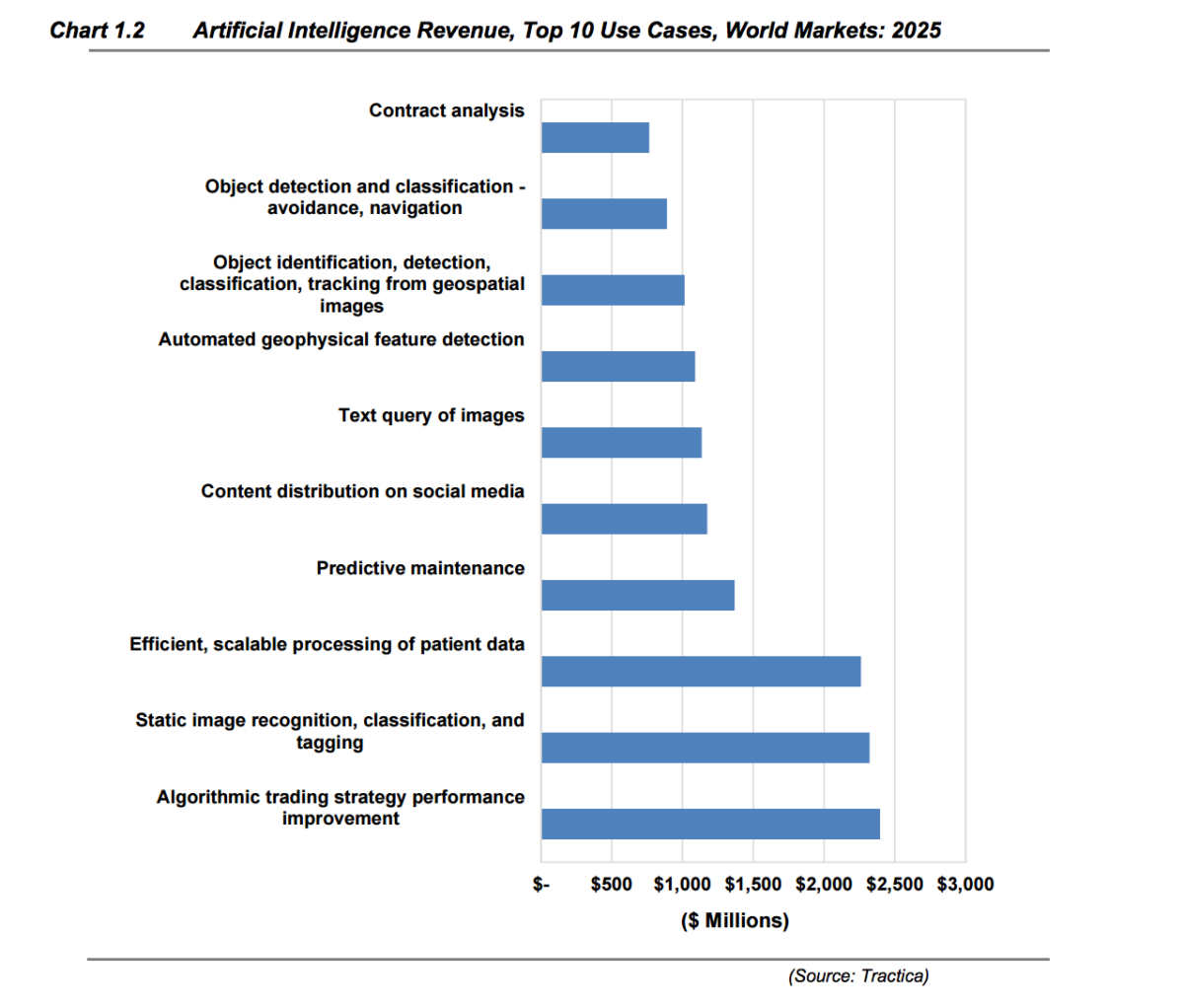 The point is that the business function of artificial intelligence and machine learning is to glean insight from massive amounts of data human beings cannot analyze quickly enough, and discover relationships in all that apparently random data, and allow application of such insights to organizational and business processes.

With regard to mobile communications, the most-significant data store probably is “current location,” even if that data is rarely used in a direct sense by mobile operators except as required to “connect to the best radio at the moment.”

As always, privacy issues are barriers to using such location information in a more-useful way, for generating insight about future behavior. And location data, by itself, is not as useful as location data combined with detail from many other data stores that inform the analysis engines about past behavior.

In that regard, it is virtually impossible to separate formerly-separate trends, including artificial intelligence, big data, and the Internet of Things (IoT) and mobility itself. Big data requires AI to create new insights, while IoT puts into place the sensors that will generate granular new data, while mobile networks will be key to connecting many of those new sensors.
at October 29, 2017 No comments:

Some believe internet access prices are going to climb substantially--possibly doubling--over the next decade, in some markets, even if the longer-term trend has been for prices to fall.

Since 1997, U.S. internet access prices have fallen, but there have been other changes. Mobile plans have tended to be priced based on buckets of usage, so as usage has climbed, consumers also have tended to buy bigger usage plans, which cost more. Fixed internet access has been priced on speed, so as consumers have shifted to faster-speed plans, their spending has climbed.

That argument, in the U.S. market, is that the leading suppliers (cable TV companies) will have to raise internet access prices to replace lost video revenues.

But “supplier need” always has to be balanced against  “end user demand” and market dynamics. No amount of supplier need has lead to price increases for voice services or text messaging, for example.

Perhaps video entertainment service trends will prove instructive, as linear video subscription prices have moved only in one direction--higher--for many decades. On the other hand, the linear video business now is shrinking, and lower-cost substitutes (Netflix, Amazon Prime, Hulu) are gaining share.

That suggests both lower linear video revenues longer term, even if some customers might be willing to pay higher prices.

Greater competition from third parties and mobile, orders of magnitude more spectrum, lower-cost networks and even greater use of Wi-Fi are likely to combine to limit pricing power by internet service providers, no matter how much they might want to boost prices.

And if capacity “abundance” replaces capacity “scarcity,” as seems entirely likely in the U.S. market, suppliers will have a hard time raising prices.

User perceptions about the level of internet access prices (headed up, largely flat or declining) might or might not match actual pricing levels. That is especially true when pricing is relative to speed or consumption, and the consumption curve changes.

Among the complications: changing product attributes; inflation; actual versus posted prices; volume discounts; changes in supply and demand. It also matters “how” prices are measured.

According to the International Telecommunications Union, fixed network broadband prices as a percentage of gross national income actually have dropped substantially since at least 2008.

Buyers of business internet access for longer periods of time will attest that prices have done precisely that, even ignoring the vast increases in connection speed (the traditional pattern is that faster services, or services with greater usage allowances, cost more).

Fixed Broadband Prices as a Percent of Gross National Income 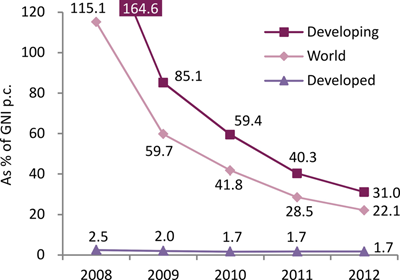 Some other more recent forecasts suggest the price declines will not abate.


Complicating matters further is the huge role played by Wi-Fi. Bell Labs Consulting estimates that, by 2020, Wi-Fi will have the potential to satisfy 66 percent of all growth in demand globally. And that is with consumption increases from 2014 levels of 30 to 98 times. 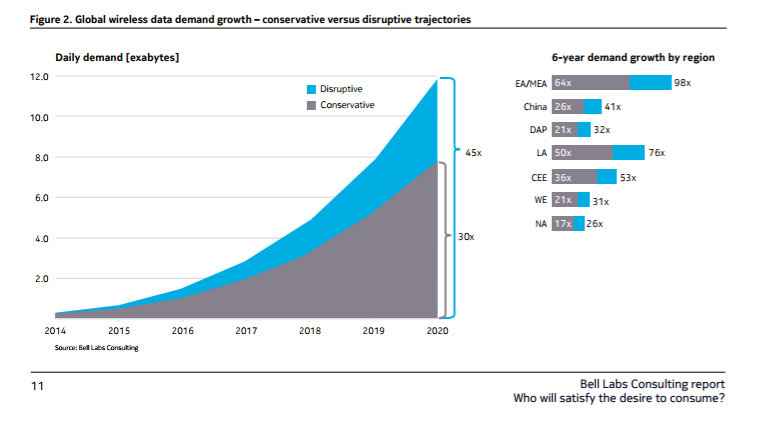 As with computing products, though, the “product” improves with time (using access speed as one measure of product quality). So even if posted retail prices remain relatively consistent, price per megabit per second has dropped.

Also, demand changes over time, as typical users consume more data the longer they use the internet, and internet access services.

On the supply side, each new generation of networks (mobile and fixed) tends to supply more bandwidth at lower prices per delivered bit.

Also, posted retail prices do not actually tell the story about pricing. What matters are the plans most people actually buy, and the level of discounts offered. Another issue is the “effective price,” since the cost to consumer a fixed amount of resources might, or might not, be the same as the amount any user actually winds up consuming.

In other words, retail prices and actual prices paid might be different. Discounts for family or shared plans might be quite important. And “effective” prices are not the same as “nominal prices.”

A given plan might offer X gigabytes of usage for $40. But if a user only actually uses a tenth of the allowance, the effective price per gigabyte is actually $40/.10*X. 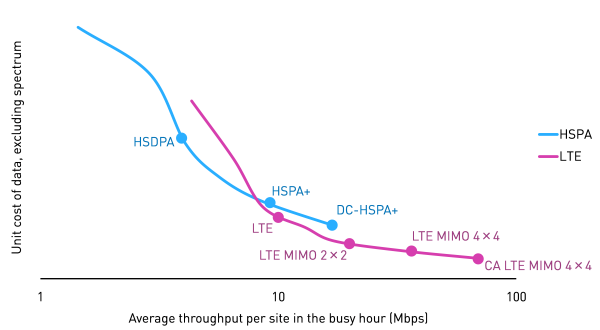 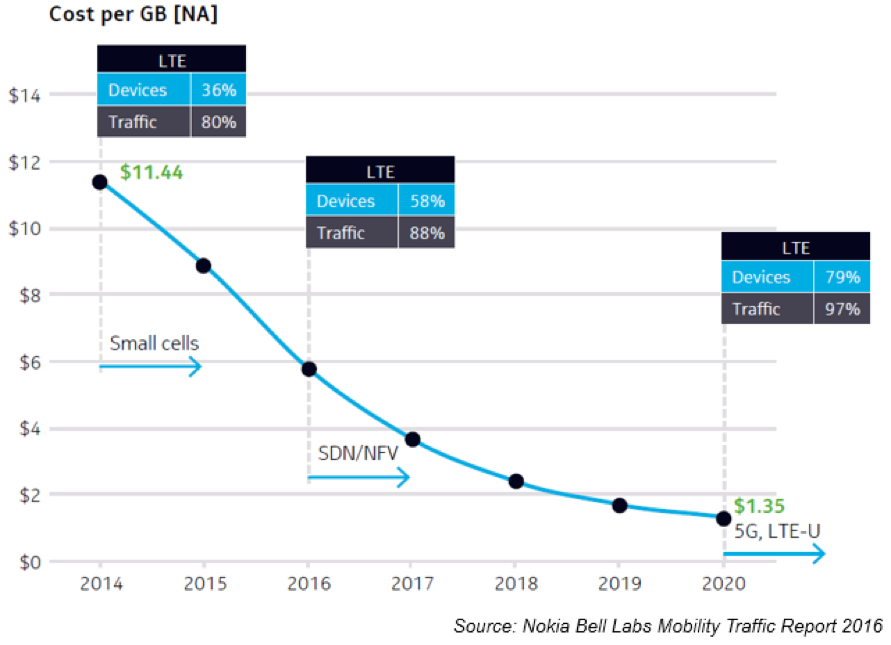 Other big potential changes could have an impact, as well. Video entertainment consumption is shifting to mobile screens, which might further alter spending patterns. And in the 5G era, for the first time, mobile internet access might become a full substitute for fixed access.

There also are many ways suppliers boost revenue, while keeping posted retail prices lower. Airlines advertise ticket prices that do not include taxes and other amenities, such as baggage check fees, food and beverage, Wi-Fi access, seat selection and other services that lead to higher revenues than the retail base price might suggest.

Likewise, fixed internet service providers often advertise one price for access, but without showing taxes and fees, rental of in-home equipment (modems) or additional charges that can add 20 percent or more to the end user total cost.

On the other hand, perhaps few customers actually pay the full retail price for internet access, as they buy discounted bundles of service.

Still, a reasonable person, looking at trends in the consumer internet access market, would likely agree that typical prices could be headed up, at least in part because consumers have been buying faster tiers of service that cost more. That is arguably true in both mobile and fixed segments of the business.

Also, spending less on some products (linear video, voice, messaging) does free up incremental buying power for increases in spending on alternative products. That has been true for internet access and mobile spending, which in part have grown household spend on communications services, but also have been paid for by reductions in fixed network voice spending.

In the U.S. market, “flattish growth or in some cases falling fixed broadband subscriptions and changes in consumer perception in what they want from a bundle will lead to fixed broadband revenue expected to reach $59.9 billion at 1.5 percent compound annual growth rates through 2021, PwC predicts. “Conversely mobile internet revenues will increase by a CAGR of 8.9 percent to US$129.8 billion as LTE subscriptions rise in parallel with demand for OTT streaming services and mobile data consumption continues its rapid increase.” 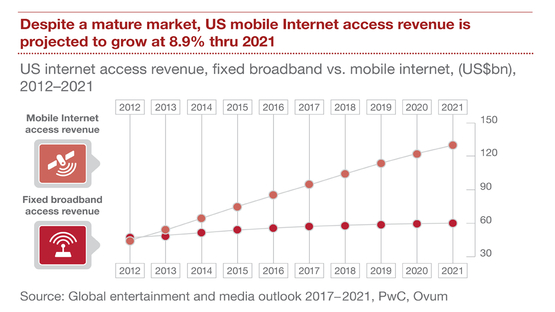 Such revenue increases have been the rule for the past five years. 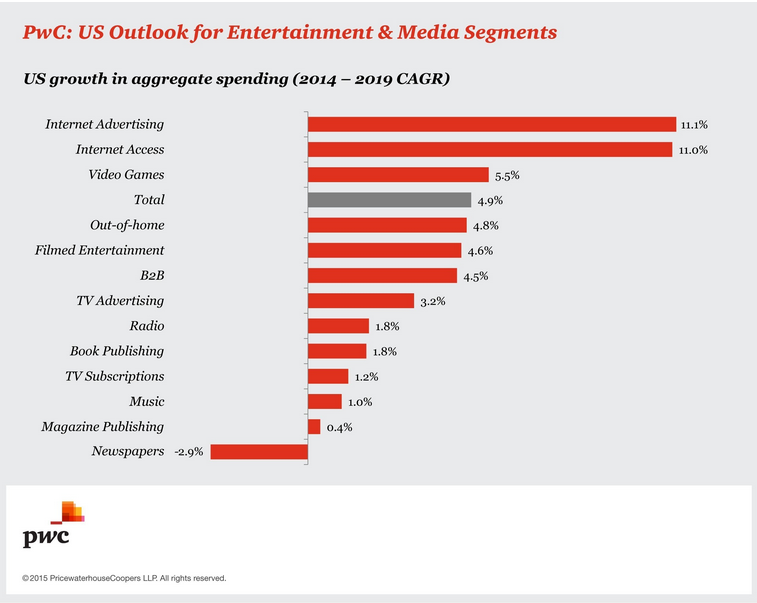 And the growth of mobility revenues might be key to the full story. Mobile subscriptions are sold to persons, not places. If the average home has 2.5 people, that means nearly 2.5 mobile subscriptions per home. So any increase in mobile usage and pricing has a multiplier effect, compared to home access, where only one account is necessary.


According to PwC and Ovum, mobile will represent most of the revenue growth, not fixed network access.
at October 28, 2017 No comments: