Whether the global telecom industry will see revenue growth or revenue decline in 2018 is unclear. Analysts at the Economist Intelligence Unit expect a two percent decline in global revenue in 2018. Others expect slight growth, overall.


Older forecasts have tended to predict continued revenue growth. The issue is whether trends  are breaking, in an industry that has seen only growth for over a hundred years.


Fixed line voice accounts peaked between 2000 and 2003 in most developed markets, for example. Long distance revenue peaked in the U.S. market about 2000 as well. Mobility drove growth for the past few decades, globally but account saturation in developed markets has generally been reached.


According to the Organization for Economic Cooperation and Development, 2008 broke the growth trend as that apparently saw peak revenue, at least on a short term basis (seven straight years).


The hope, of course, is that big new sources of revenue will emerge in the 5G era, particularly related to internet of things apps and services. But we are years away from assessing the validity of such hopes.


In the meantime, developing Asia will continue to see stronger growth, while Europe probably will decline further. 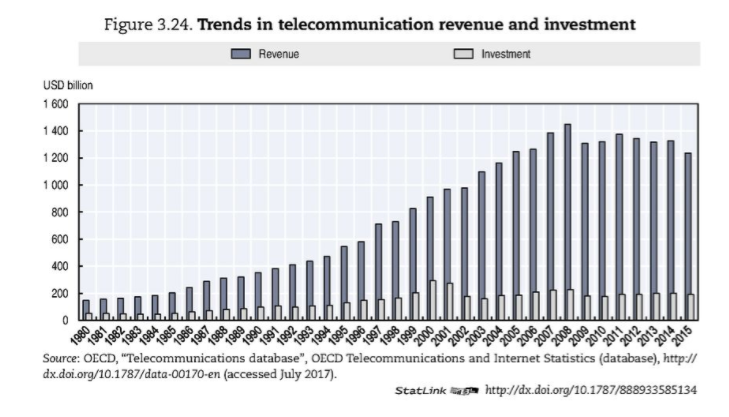