What HDTV Could Teach Us About Mobile, OTT Video

“People prefer HDTV even when the TV is off,” one executive quipped, in the days before high-definition TV was launched in the U.S. market. What he meant was that the different aspect ratio of the screen (16:9 compared to 4:3) was preferred over the analog TV screen. It is easy to say that people wanted the higher-definition picture, but there were other elements of the experience that also changed at the same time.


At the same time, the shift to flat screens also had begun, adding a further stylistic change of form factor, and something consumers clearly preferred.


The point is that sometimes consumers desire a product for all kinds of reasons beyond the stated purpose of an innovation.


That is probably good advice when considering more-recent changes, such as the shift to on-demand, non-linear viewing and streaming delivery. People might choose to behave in ways that ultimately may surprise, and not as expected.


For example, most likely believe the story that streaming has value because it provides sufficient choice at lower prices than linear TV. But a new Harris Poll suggests most consumers will eventually spend as much on their streaming subscriptions as they do on linear TV.


Regardless of whether it is linear subscription TV  or OTT, consumers are consistent in how much they are willing to pay and the amount of content they view. Consumers want about 15 cable channels or OTT services, and are willing to spend $100 per month total, the survey suggests.


The typical U.S. home spent $107 a month on linear subscription TV service in 2018, according to Leichtman Research. And prices for streaming services also are growing. The linear TV replacement services, for example, cost between $40 and $70 a month, with Sling at the low end and DirecTV Now at the high end.


A couple of observations therefore are apt. The AT&T move into linear TV has been criticized as a failure. And some also did not favor its later move into content ownership, either. Some supporters of both moves might say the Harris Poll results tend to confirm that linear video is a springboard to OTT video, and will ultimately be of similar revenue magnitude, even if less of the total revenue might flow to any single former linear video provider.


But the poll results also suggest the shift to skinny linear bundles makes sense, since that approach is best suited to a new market in which overall non-streaming demand falls. But linear streaming formats and on-demand formats will coexist.


Mobile TV is viewed as a coming evolution of the business as well. Consumers who use at least one OTT service are heavy mobile users, with many saying they are on their smartphone for more than six hours every single day.


Streamers also consume more than 2.5 hours of video content every day on their smartphones, according to the Harris Poll commissioned by OpenX. 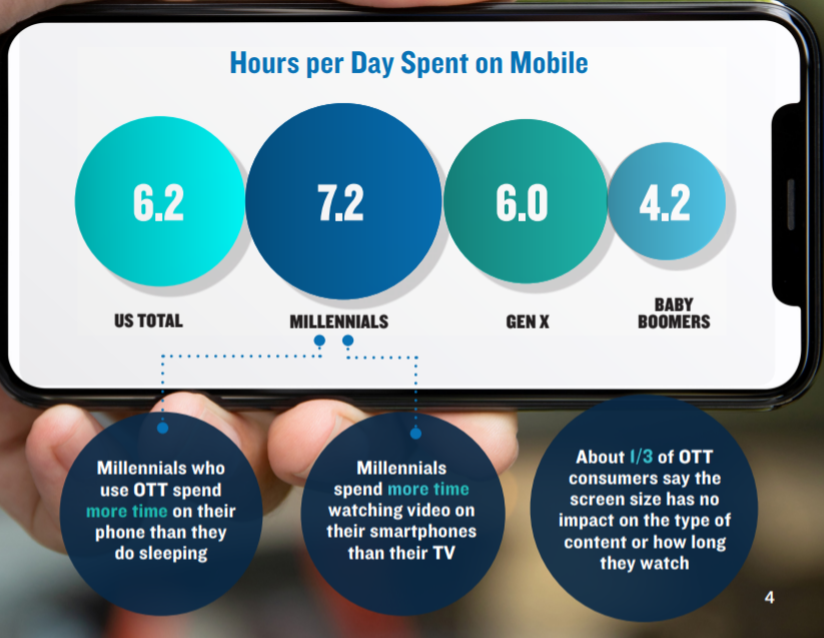 
What is less clear is how the video subscription business could change as mobile delivery becomes easier, or more popular. Screen size does not seem to be the limitation it once was, as mobility now seems to be valued at least as much as screen size. Unclear are the potential changes in features.


Some might argue that the big change coming with mobile streaming is simply the screen the video is consumed on, namely, the mobile phone instead of the television. So video consumption becomes less place-based (not a fixed TV location).


At least in principle, that creates new opportunities for temporary venue-based video, in some instances. But all that is yet to be developed. Still, it is possible that mobile TV might eventually result in new features for video consumption, as HDTV actually represented several concurrent changes beyond image quality.
at April 12, 2019