"Bigness," By Itself, is Not an Antitrust Problem

Antitrust regulation is the “normal” remedy for excessive market power, even when obtained through competitive processes: people use the dominant products because they prefer them. What might be new is that oligopoly exists in the internet applications space, as tends to occur in the more-regulated telecommunications business. That “winner take all” market outcome now is expected for internet apps.

That gatekeepers issue is relevant for the internet ecosystem because it could, or should, shape policies intended to maintain investment and competition within the ecosystem. Federal Communications Commission policy of the last eight years has assumed that internet service providers are among the key gatekeepers, if not “the” gatekeeper, requiring regulation of internet access under common carrier rules.

Others might argue there are other key gatekeepers as well.

Consider that Alphabet has an 83 percent share of the mobile search market in the United States and just under 63 percent of the US mobile phone operating systems market.

To be clear, some of us are in favor of light or lighter regulatory touch for every part of the ecosystem--app and access providers alike. That is not the only choice. As always, regulators can apply heavier regulation to some industries or companies as a way of fostering more competition. The other approach is to lighten regulation on some potential competitors within the ecosystem able to provide competition.

Some might argue the right approach is to take account of rising and declining “gatekeeper” power within the ecosystem. There might be multiple gatekeepers, but some arguably are gaining power, others losing it. Few who follow the internet ecosystem would disagree that app providers are growing much faster than ISPs. In fact, one might actually argue that ISPs are losing power within the ecosystem.

A not-so-often comparison to telecom providers is made by media entrepreneur Jonathan Taplin, who notes that AT&T has a 32 percent market share in mobile phones and 26 percent in linear subscription TV.

The combined AT&T-Time Warner will have $8 billion in cash but $171 billion of net debt. Alphabet has $76 billion of cash and total debt of less than $4 billion.

Alphabet alone has a market capitalization of around $550 billion. AT&T and Time Warner combined would be about $300 billion.

That is not sufficient reason, some would argue, for taking antitrust action against any of these firms. In some markets, especially the tier-one level of telecommunications, scale seems an inevitable requirement. Scale in application markets arguably means those firms can invest in many new services and capabilities at a high level, and fast.

For tier-one telecom companies, capital intensity might be the issue. For app providers, huge scale required to drive advertising markets might be the requirement. 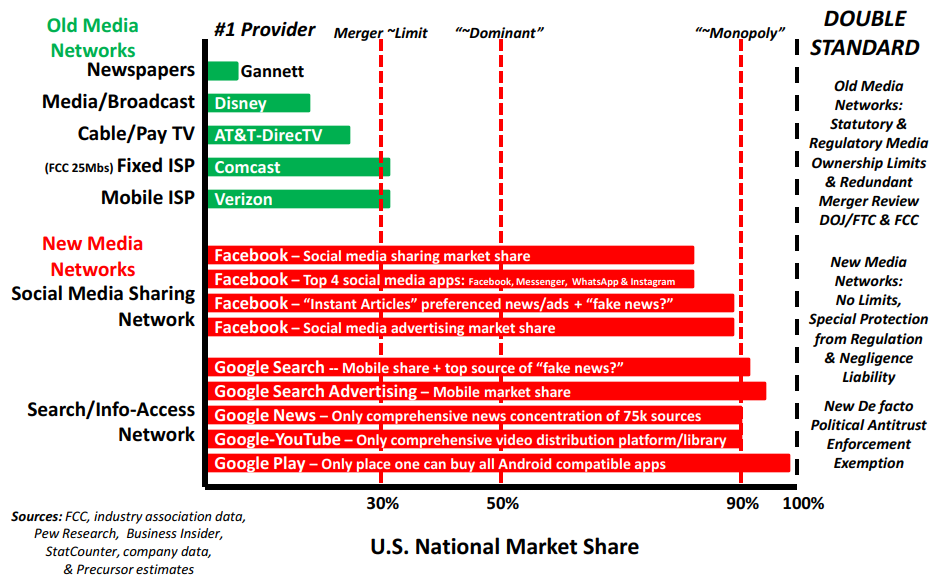