Business Case for Much More Fiber Remains a Challenge

Verizon’s decision to deploy NG-PON2 networks, AT&T and Verizon fixed wireless plans and use of unlicensed spectrum, plus spectrum sharing, are among the ways various internet access providers are working to improve the economics of next generation fixed networks.


As always, competition and the business model are key constraints.


Policymakers and regulators always have to balance competition and investment incentives in the communications business. Too much perceived competition lowers profits, and inhibits investment; but lack of competition tends to inhibit consumer-facing innovation.


At the moment, incentives are a key problem where it comes to next generation fixed network investment.


If consultants at Deloitte are correct, and as much as $130 billion to $150 billion in additional optical fiber investment is needed in the U.S. market, under conditions where financial incentives do not exist, something will have to give.


As Deloitte sees matters, at the moment, U.S. service providers do not have incentives high enough to support that level of deployment of new facilities. For starters, some major suppliers--including both cable TV and telcos--have high stranded assets.


That obviously creates a return on invested capital problem. Unless something changes, in terms of revenue upside, many of the largest internet service providers will have a hard time vastly increasing their optical network investment. 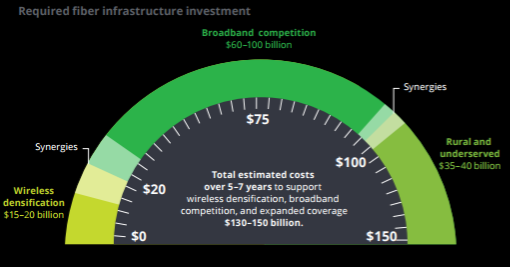