For transport and access service providers, video is a problem and a curse. Video has the absolute lowest revenue per bit, and therefore potential profit per bit, of any traffic type.
Video also dominates data volume on global networks, but has revenue per bit perhaps two orders of magnitude (100 times) less than voice, for example.


Those reductions in price per unit sold would be nearly catastrophic in any business, and tell you most of what you would need to know about the direction of network capital and operating costs to achieve sustainability.


At the same time, those catastrophically-lower revenue per bit measures also tell you why surviving tier-one service providers must (not “should”) find big, new revenue sources.


Video always has had low revenue per bit, in large part because, as a media type, it requires so much bandwidth, while revenue is capped by consumer willingness to pay. Assume the average TV viewer has the screen turned on for five hours a day.


That works out to 150 hours a month. Assume an hour of streaming (or broadcasting, in the analog world) consumes about one gigabyte per hour. That represents, for one person, consumption of perhaps 150 Gbytes. Assume overall household consumption of 200 Gbytes, and a monthly data cost of $50 per month.


That suggests a cost--to watch 150 hours of video--of about 33 cents per gigabyte. Assume a mobile or fixed line account represents about 350 minutes. Assume the monthly recurring cost of having voice features on a mobile phone is about $20.


Assume data consumption for 350 minutes (5.8 hours a month) is about 21 Mbytes per hour, or roughly 122 Mbytes per month. That implies a cost of roughly $164 per gigabyte.


In other words, video revenue for the access provider is perhaps 33 cents per gigabyte, while voice generates perhaps $164 per gigabyte. These days, unlimited domestic texting is often a feature, not a revenue driver, generating zero revenue per gigabyte.


Since video now is the application that now drives global network traffic, you can understand the need to reduce cost per bit in the network, and in all network-related operations, to sustain the networks, if revenue per bit is declining.


As a corollary, and though it often is a criticized move, the way entertainment video now is created and distributed shows the imperative of moving beyond “distribution” as the video entertainment role.


Those economics are necessary in a business where low-price bits drive network transmission and access economics. 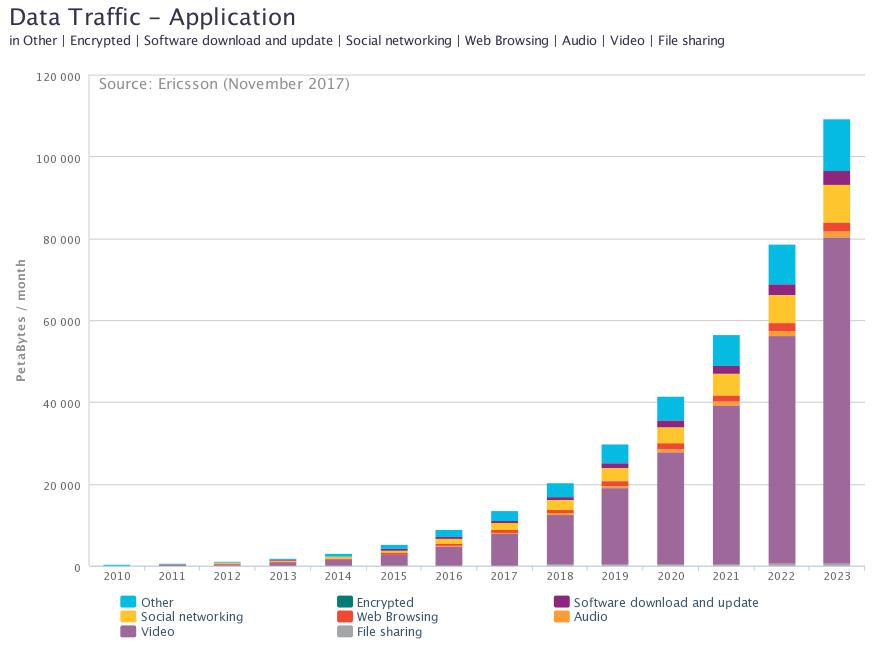