Since only a bit over 10 percent of U.S. households currently buy a 1-Gbps service, that might seem like overkill. But if we know anything about internet access, it is that headline speeds keep increasing up to 50 percent per year, and have been doing so since the early 1980s.

If so, then 10 Gbps headline speeds should be commercially available within a few years.

Nielsen Norman Group estimates suggest a headline speed of 10 Gbps will be commercially available by about 2025. 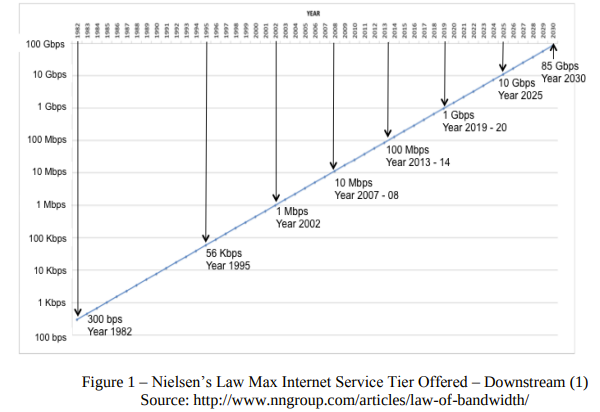 Headline speeds in the 100-Gbps range should be commercial sometime around 2030.

How fast will the headline speed be in most countries by 2050? Terabits per second is the logical conclusion. Though the average or typical consumer does not buy the “fastest possible” tier of service, the steady growth of headline tier speed since the time of dial-up access is quite linear.

And the growth trend--50 percent per year speed increases--known as Nielsen’s Law--has operated since the days of dial-up internet access. Even if the “typical” consumer buys speeds an order of magnitude less than the headline speed, that still suggests the typical consumer--at a time when the fastest-possible speed is 100 Gbps to 1,000 Gbps--still will be buying service operating at speeds not less than 1 Gbps to 10 Gbps.

Though typical internet access speeds in Europe and other regions at the moment are not yet routinely in the 300-Mbps range, gigabit per second speeds eventually will be the norm, globally, as crazy as that might seem, by perhaps 2050.

The reason is simply that the historical growth of retail internet bandwidth suggests that will happen. Over any decade period, internet speeds have grown 57 times. Since 2050 is three decades off, headline speeds of tens to hundreds of terabits per second are easy to predict. 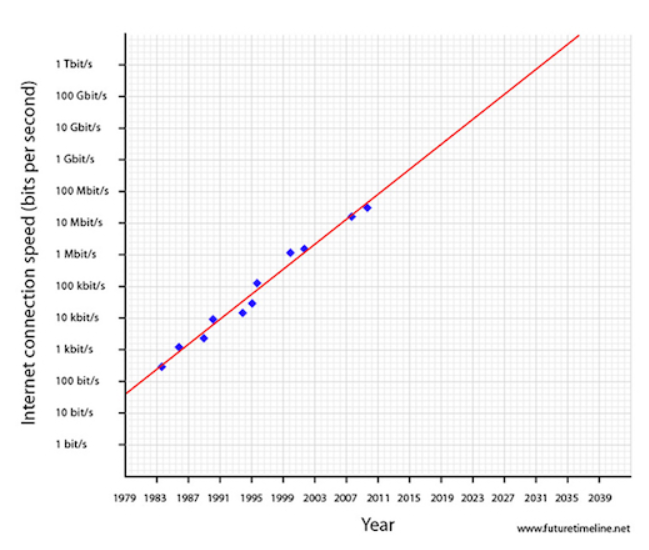 Often, the driver is a service for business customers.

But consumer services are headed that same direction. U.S. cable operators are working on future upgrades of their standard offers to 10 Gbps.

Frontier Communications, for example, is preparing rollout of a 2-Gbps offer, in addition to its standard 1-Gbps and entry-level 500-Mbps offers. That will likely feature symmetrical bandwidth

All of that is consistent with a market need for headline speeds in the 10 Gbps range by about 2023 to 2025. The issue for ISPs is how much that upgrade will cost, what the time frame is and how much disruption will occur as that upgrade happens.

In at least some cases, telcos might find their upgrade path is more graceful than for cable operators, though the reverse has been true for two decades. 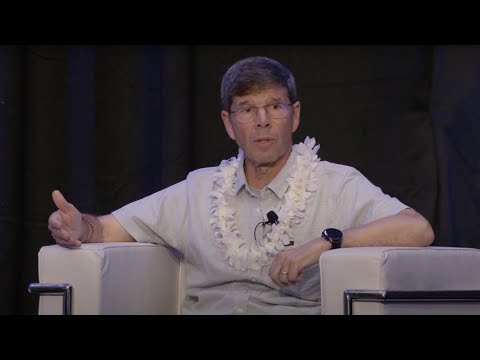