Mobile Social Networkers Do More of Everything 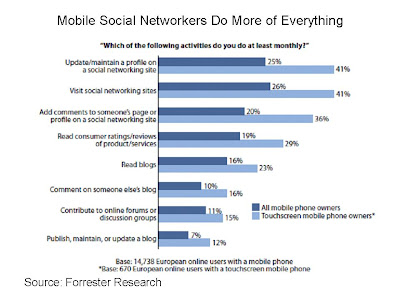 “Do we have to build a social network on our own or do we have to invest in an existing one?" asks France Telecom CEO Didier Lombard. "We haven’t decided yet.”

The question itself provides a clue to the growing importance social computing and networking holds for mobile service providers. To be sure, we are at the beginning of a convergence between mobile behavior and social application behavior.

But that is going to change.  In the United Kingdom, up to 40 percent of 16- to 24-year-olds are already using or are interested in accessing social networking sites from their mobile phones, says Husson.

In addition to accessing social network updates, social computing apps include media-sharing, such as viewing and sharing photos or videos taken from their mobile phones or use microblogging services.

Three percent of European mobile phone owners access blogs from their mobile phones, either to view them, comment on them, or publish them; the same percentage read or post customer reviews and ratings, Husson says.

But mobile social networking is growing fast. About 65 million people are now actively using Facebook Mobile, for example, more than tripling its audience in eight months.

Service operators also are forging their own partnerships for many of the same reasons. Consumers who access social networking sites using mobile phones are heavy users of communication services.

So mobile service operators are aggregating social networks, allowing users to get, and make, all their updates from a single operator portal, for example.

"Location" is one reason the mobile social Web is seen as increasingly important. When a user's device knows knows "where you are, where your friends are, and what they are doing," social networking becomes more valuable.

Location is by at the very heart of a mobile phone’s value, and Forrester believes that location as a service will become a core enabler of mobile activities in the future.

Location will progressively become a component of social communications as consumers share their location, geo-tagged photos, and comments, helping them explore places and events that their friends recommend.

New technologies also will facilitate the connection between physical and online worlds. For example, consumers will be able to point their camera phone at a product, read reviews from peers, glance at ratings, look up information, and even find the closest store that sells it.

The key insight is that the mobile phone is not simply an extension of the PC-based Internet. That is why a great percentage of mobile broadband access (to support handset applications) is supplemental to, and not a replacement for, fixed broadband access.

Forrester expects 39 percent of European mobile users to adopt the mobile Internet by 2014. And at least initially, mobile service providers will be among the biggest winners, based on sales of new mobile data plans, Husson argues.

Though service providers worry their text messaging revenues will be cannibalized by social network posts, Husson thinks that is unlikely.

Service providers also are likely to benefit in the form of reduced churn if they are able to create the most compelling user experiences.

Advertising, premium content and payment services also are other likely revenue streams. In the future, wiring money to one's social mobile contacts using a mobile phone could be very convenient, for example.

Aggregation and synchronization of social network and other key address books with location information in real time are likely to become important ways mobile service providers create value.
at October 26, 2009

The convergence around town centres is going to be really interesting as communities re-connect themselves down-town. Linking this all to local loyatly via smartcard technology where you can "live your life on one card" will be especially interesting to the mobile networks since it will allow business and government to deliver personalised goods and services.

A pilot of this is about to take place in Greater Manchester. More info at www.myhometownuk.co.uk