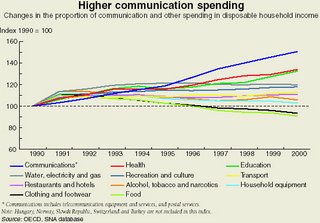 That's a problem for service providers who invest in expensive infrastructure and simply cannibalize revenue in legacy parts of the business. Without a shift in the consumption function, there's a real problem. So the good news is that the function seems to be shifting. And not just in the communications area.

The global entertainment and media industry is in a solid growth phase and will increase at a 6.6 percent compound annual growth rate (CAGR) to $1.8 trillion in 2010, according to PricewaterhouseCoopers.

Notably, there's a simultaneous shift away from physical distribution and towards digital delivery. Global spending using online and wireless channels reached $19 billion in 2005 and will increase to $67 billion by 2010, PricewaterhouseCoopers says.

“Virtually every segment of the entertainment and media industry is shifting from physical distribution to digital distribution of content," says Wayne Jackson, global leader of PricewaterhouseCoopers' Entertainment & Media Practice.

That creates substantial revenue opportunities for any number of players in what used to be the legacy telecom space.
at November 15, 2006