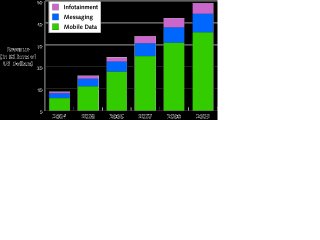 Vodafone CEO Arun Sarin says social networking, mobile advertising, mobile video, and other advanced applications will generate "10 percent of our revenue within three or four years." Some might consider that target an aggressive posture for a company that today generates $60 billion in annual revenues. $6 billion annually from advertising and video? But Vodafone already gets in excess of 20 percent of total revenues from data services of one sort or another. By some measures, U.S. wireless operators now get just a bit over 10 percent of total revenues from data services.

The most successful carrier worldwide in terms of total wireless data revenue for the first six months of 2006 was NTT DoCoMo with over $5.1B in data revenues.
at November 24, 2006