"Growing Revenue" and "Cutting Costs" are Different; So is Customer or Employee Satisfaction


That represents a change from practices of the past six decades, when most information technology spending was designed to improve efficiency and lower cost.


In addition to higher spending on front-office systems for sales and marketing, organizations will  be spending to develop new products, handle and fulfill  orders, serve customers and acquire  the human and partner resources for doing this effectively.


Still, what might be called “hygenic” spending (to maintain health) to support efficiency and cost reduction will continue to represent over 70 percent of total enterprise technology spending through 2017.


Much of that spending will support core systems already put into place, and represents maintenance and operations spending.


As a proportion of new project spending, purchases to support revenue initiatives will exceed hygenic spending starting in 2014. And more of that new spending will use cloud computing mechanisms.


Those spending priorities are similar, in principle, to a theory about employee satisfaction, originally developed by Frederick Herzberg, and known as two-factor theory.


That is not the way most of think about the matter. Instead, we tend to see a single scale, with happiness on one end, and unhappiness on the other.


The practical implications are enormous. You can pay employees enough to keep them from leaving. But paying them more does not automatically increase output, motivation, creativity or commitment.


To increase employee motivation and commitment, you have to do other things that speak to employee sense that the firm recognizes and values the employee, that people have a chance to contribute and be recognized.


The same applies for customers. A perceived fair value for fair price will help keep customers from deserting to other providers.


To make customers advocates, an organization must do different things. Somehow, customers must come to feel that a product or service reflects who they are, mirrors and shares their values, adds prestige or other feelings of well-being. Think Apple, Starbucks, Whole Foods.


What makes them “unhappy” is on a different scale. 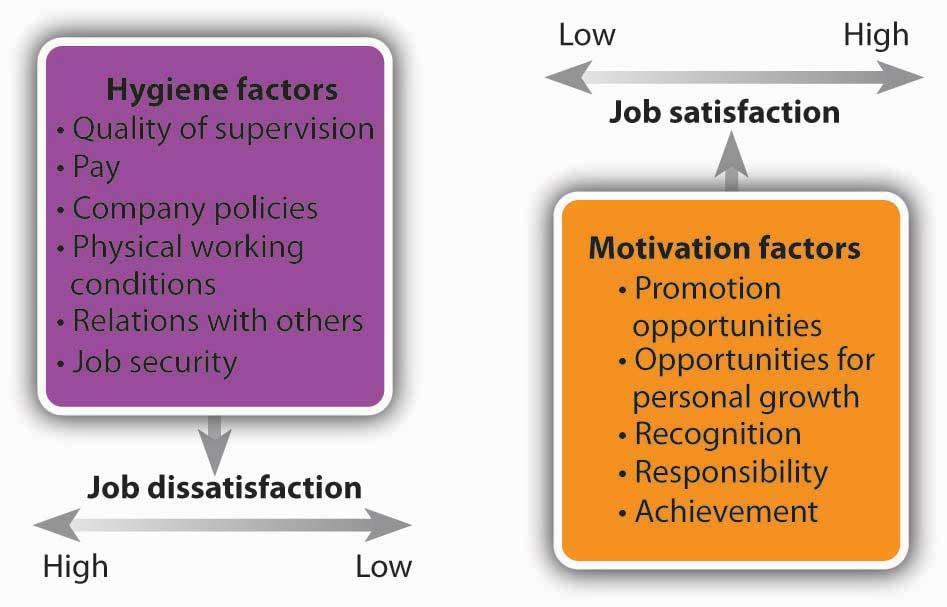 All that might seem esoteric. It is as practical as possibly could be. It means managers must offer working conditions and pay viewed as adequate enough to avoid employee dissatisfaction. That just keeps people from leaving, though.


To create active, contributing, motivated employees, organizations have to work at other levels, offering opportunities for personal growth, recognition and achievement that are relatively non-material.


The “hygiene” factors, in other words, keep people from leaving. The “motivation” factors generate enthusiasm, creativity and energy. Dealing with hygiene (pay, working conditions) is necessary. But it isn’t sufficient to create commitment.