Where Available, Fixed and Mobile Internet Access Both Get Used, All the Time

Smartphones are expected to become the way most people in some markets use the Internet. In markets where smartphone adoption is significant, and where fixed network connections also are common, both mobile and fixed Internet access get used daily, a study by The Cocktail Analysis has found.

The study of female Internet users in Brazil, conducted in January 2014, found that smartphones were arguably the most-used platform for Internet access. About 81 percent of female smartphone users surveyed reported they used a smartphone for Internet app access every day.

On the other hand, high speed access using desktops and laptops also get used daily for Internet access, 79 percent of respondents reported.

Tablets are used by 52 percent of owners to access the Internet every day, and tend to be used at home. 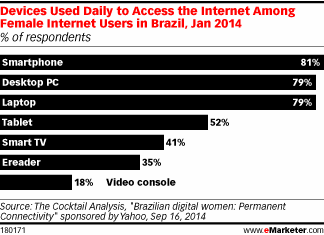 The point is that, in markets where mobile and fixed Internet is available, people use both forms of access, daily.