Consumer Willingness to Pay for Gigabit Has Sharp Limits

Consumers seem to evaluate internet access offers the same as any other product, which is to say they compare value to price. And that means most consumers do not buy the most-expensive, fastest service, but tend to pick services that offer high enough value, at a reasonable enough price. In other words, they tend to buy the good enough service because it costs less than the “best possible” service, sold at premium prices.

“As with the PC, one could again reasonably ask whether bandwidth increases continue to generate substantial value for consumers,” researchers at the Technology Policy Institute say. “Consumers highly value bandwidth enhancements at lower speeds, but the incremental value of bandwidth decreases rapidly” as speeds increase.

Since few consumers think about their internet access purchases in “dollars per Mbps,” the more relevant graph is that which shows willingness to pay for bandwidth at various speeds. Though total demand continues to increase from about 150 Mbps up to a gigabit, most of the demand is at 150 Mbps and below, TPI surveys have found. 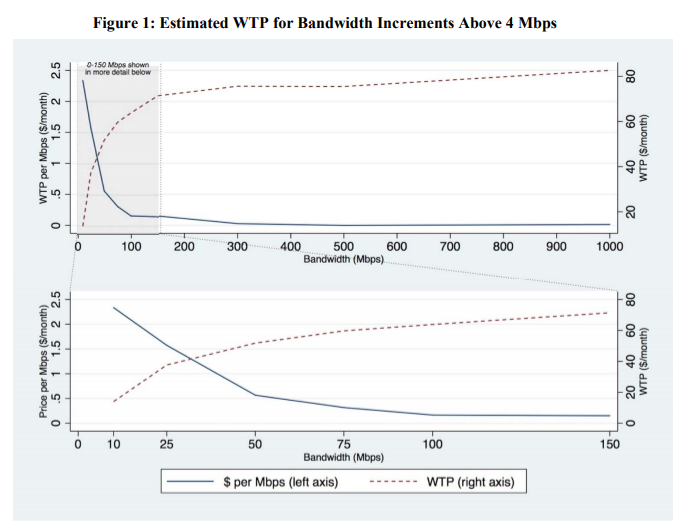 One way of parsing this data is that about half the total demand is for service costing about $40 a month, while the overwhelming majority of consumers seem resistant to pay more than about $70 a month.

As you might expect, consumers value bigger usage allowances and lower latency, and appear willing to pay some incremental fees to get reduced latency and bigger usage allowances. Still, there also is reluctance to spend more than $80 per month for service, no matter how fast the service is.
at August 10, 2018