“The vision for 5G isn't merely to make mobile connections faster or more reliable, but to provide uniform ‘fiber-like’ broadband everywhere,” says analysts at Morgan Stanley. And that might be among the big differences between 5G and all prior mobile generations, along with virtualized network slices, edge computing, ultra-low latency and support for internet of things.


But 5G also is built to interwork with many other access and connectivity platforms, including 2G, 3G, 4G, WiFi and others. It is a network of networks.


And while every mobile platform has provided more bandwidth, 5G will boost speeds by an order of magnitude to two orders of magnitude, enough to become a functional substitute for fixed network access.


Ultra-low latency means 5G can become a new platform for traffic safety, critical infrastructure and industry processes. Also, 5G will need to support, and encourage, use of devices with battery lives as much as three orders of magnitude greater.


That noted, most mobile operators are going to be rational about their 5G investments, in part because revenue upside is generally believed to be limited. Only about a fifth of industry executives actually expect that 5G will increase revenues by more than five percent. Nearly a third of executives believe revenue will grow by less than five percent. And nearly a third believe revenue will stay flat in the 5G era.


The point, of course, is that observers likely expect legacy revenues to diminish, even as new 5G revenues ramp up. So net growth might be tough. In that regard, one of the easier “new revenue source” opportunities is the ability to grow revenues by taking market share away from fixed suppliers. 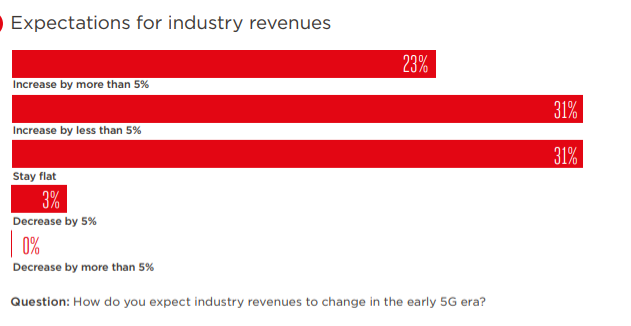