Worldwide spending on the Internet of Things will reach $745 billion in 2019, an increase of 15.4 percent  over the $646 billion spent in 2018, according to International Data Corporation. IDC expects worldwide IoT spending will maintain a double-digit annual growth rate from 2017 to 2022 and surpass the $1 trillion mark in 2022. 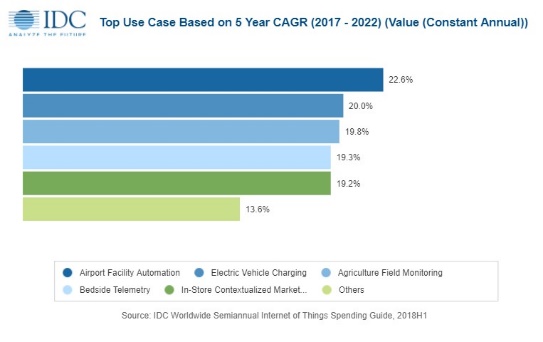 
IoT spending among manufacturers will be largely focused on solutions that support manufacturing operations and production asset management, IDC predicts.  In transportation, more than half of IoT spending will go toward freight monitoring, followed by fleet management. IoT spending in the utilities industry will be dominated by smart grids for electricity, gas, and water.


The industries that will see the fastest compound annual growth rates over the five-year forecast period are insurance (17.1 percent), federal/central government (16.1 percent), and healthcare (15.4 percent).


Consumer IoT spending will reach $108 billion in 2019, making it the second largest industry segment, IDC says. The leading consumer use cases will be related to the smart home, personal wellness, and connected vehicle infotainment, IDC forecasts.


The IoT use cases that will see the greatest levels of investment in 2019 are driven by the industry spending leaders: manufacturing operations ($100 billion), production asset management ($44.2 billion), smart home ($44.1 billion), and freight monitoring ($41.7 billion).


The IoT use cases that are expected to deliver the fastest spending growth over the 2017-2022 forecast period provide a picture of where other industries are making their IoT investments. These include airport facility automation (transportation), electric vehicle charging (utilities), agriculture field monitoring (resource), bedside telemetry (healthcare), and in-store contextualized marketing (retail).


IoT services will be the largest technology category in 2019 with $258 billion going toward traditional IT and installation services as well as non-traditional device and operational services.