about 76 percent of all Internet access connections globally use mobile connections, according to the International Telecommunications Union.


In other words, mobile is the dominant way most people use either voice or Internet access. At the same time, the percentage of people who actually buy voice service from a fixed network is declining, both in developed and developing markets.


Those facts have implications for revenue growth, capital investment and business strategy,
shaping not only “who” is in the business but “how” they approach the business and “where” the revenue growth is, which services are growing and which are declining. 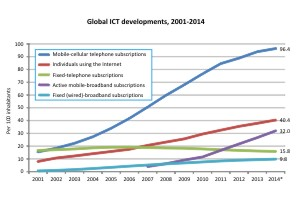 In the U.S. market, for example, revenue growth has shifted to mobile segment, with one important exception.


AT&T and Verizon are seeing revenue growth in their fixed network segment, on the strength of high speed access services and video entertainment.


Google Fiber likewise anchors its service with gigabit high speed access service, complemented with video entertainment. Note that Google Fiber does not offer branded voice service. To be sure, Google has said it would have offered voice service, were the regulatory burdens not so high.


Still, Google Fiber shows that high speed access and video entertainment are the lead apps for a fixed network business.


In the first quarter of 2014, for example, Fairpoint data and Internet services revenue grew nearly 11 percent, year over year, from $14.9 million to $19.9 million, largely on the strength of services sold to business and organization customers.


Voice access lines. on the other hand, declined 6.8 percent year-over-year as compared to 7.8 percent decline a year ago.


That provides just one example of a change in the value of a fixed access network. Whether a fixed network service provider is Google Fiber, Fairpoint Communications, AT&T or Verizon, value increasingly is anchored in high speed access, with video entertainment being the important second app.


Among the possible ramifications of U.S. industry consolidation that could happen were regulatory authorities to approve Comcast’s purchase of Time Warner Cable, an AT&T bid for DirecTV and a Sprint acquisition of T-Mobile US, not to mention any others that also could follow in the immediate wake of such restructuring, is impact on high speed access services.


Comcast would become the largest supplier of consumer high speed access in the United States. AT&T might be able to devote most of its fixed network bandwidth to Internet access services. And Sprint might find it has to re-enter the fixed network Internet access business, as a condition of getting approval for its mobile merger.


But the shift in value for fixed networks is clear. In a new twist, fixed Internet access networks provide value as a key way to backhaul mobile Internet traffic.


In some cases, up to 80 percent of mobile traffic is offloaded to Wi-Fi networks, for example.


And fixed network coverage is likely to remain rare. By the end of 2014, fixed broadband penetration will reach about 10 percent of homes globally.


And as consumers seem to be abandoning fixed network voice services in both developing and developed regions, additional investment in new fixed networks is likely to remain limited, wherever it does not already exist.


In contrast, Africa accounts for less than 0.5 per cent of the world’s fixed broadband subscriptions, and despite double-digit growth over the last four years, penetration in Africa remains very low.


Africa, the Arab States, and CIS are the only regions with double-digit fixed broadband penetration growth rates.


The Americas region stands out with the lowest growth in fixed broadband penetration, estimated at 2.5 per cent and reaching a penetration rate of around 17 per cent by end 2014.


Europe’s fixed broadband penetration is much higher compared with other regions and almost three times as high as the global average.


But where fixed networks operate, revenue growth will be driven by Internet access services.


By the end 2014, there will be almost three billion global Internet users, 66 percent of which live in the developing world.


But mobile networks will supply 2.3 billion of those total connections, or about 77 percent of all Internet access connections.

By way of contrast, there were at the end of 2013 about 1.16 billion fixed voice lines in service, according to the International Telecommunications Union. More importantly, the ITU suggests fixed telephone penetration has been declining for the past five years.


The ITU data suggests there will be about 700 million fixed network high speed access lines in service, or about 60 percent of the number of voice lines. Over time, that percentage is going to grow, at least in part because voice now has shifted to mobile networks.


There will be, at the end of 2014, about seven billion mobile phone users. Some 3.6 billion of these will be in the Asia-Pacific region, and the developing world will account for 78 percent of the world’s total mobile subscribers.


In Africa and Asia and the Pacific, mobile penetration will reach 69 percent and 89 percent, respectively in 2014. 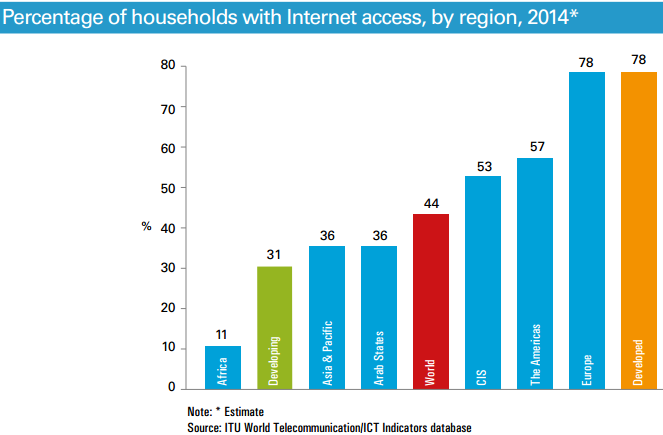 Penetration rates in the CIS, Arab States, the Americas and Europe have reached levels above 100 percent and are expected to grow at less than two percent in 2014.


In developing countries, mobile broadband adoption will be 21 percent.


By end 2014, 44 percent of the world’s households will have Internet access. About 31 percent of households in developing countries will be connected to the Internet, compared with 78 percent in developed countries.


More than 90 percent of the people who are not yet using the Internet are from the developing world.