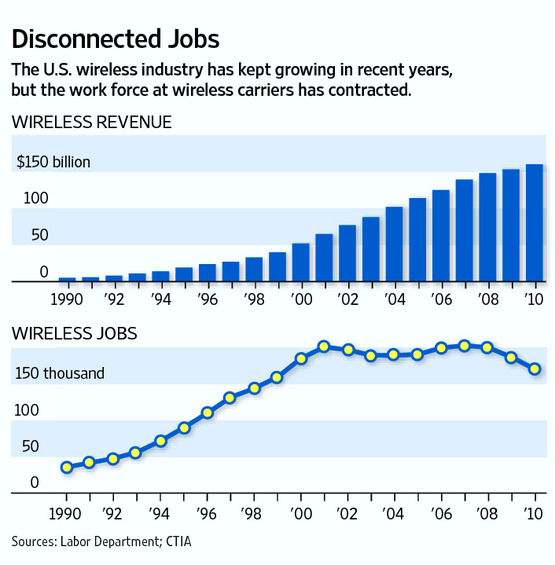 It has been a rule of thumb that U.S. cable TV operators have operating costs lower than their major telco competitors.

But on one metric--revenue per employee--AT&T and Verizon arguably perform much more efficiently than U.S. cable TV operators.

Comcast, for example, earns about $475,000 worth of revenue per employee.

Time Warner Cable, not among the best managed U.S. cable TV companies, generates revenue of about $436,000 per employee..

At least in part, those gains at AT&T and Verizon can be accounted for by continuous efforts to reduce headcount.

Over the same five-year period, Verizon eliminated 48,000 jobs. Across the industry, telecom employment has fallen by almost 200,000 since 2007, according to the U.S. Labor Department.

Most of those cuts have come in the fixed network business, as mobile segment headcounts have been roughly flat between 2001 and 2008, and have been declining since 2008.

The point is that, by any estimate, most of the lost U.S. communications jobs have come from the fixed network business.

Still, it remains the case that U.S. cable operators have operating cost structures lower than the leading U.S. telcos.

By that measure, U.S. telcos are “more efficient” than U.S. cable TV companies.

AT&T and Verizon will continue to face the challenge of matching operating costs both to market competitors and to revenue generated by each of the lines of business. But it is, in many respects, hard to argue both firms have not been performing well, in terms of revenue per employee.

The French mobile carrier that really has outstanding sales per employee uses a "Wi-Fi-first" approach that U.S. cable operators will take, eventually.


SFR, newly purchased by Numericable, has mobile revenue of about 1,258,000 euros per employee.


Orange, by way of comparison, apparently generates only about 208,000 euros per employee.


To be sure, Orange continues to have significant French government investment, so social goals--especially employment--are a consideration for Orange.

To be sure, by some estimates perhaps 33 percent of current employees will retire over the next six or seven years, allowing Orange a chance to gradually reduce the labor intensity of its French operations, assuming the French government will allow that to happen.

Some doubt much will be tolerated on that score, making it tough for Orange to get its cost structure in line with its major competitors, precisely at the point that SFR now will be able to marry cable TV services and fixed line high speed access with mobile service, more directly challenging Orange.

Also, Orange carries significant long term debt on its books as well, perhaps 30 billion euros. Paying down that debt on the basis of existing cash flow seems unlikely in the extreme.

For its part, Bouygues now seems likely to cut employees by a significant amount, in an effort to align its revenue per employee more closely with those of Free Mobile.