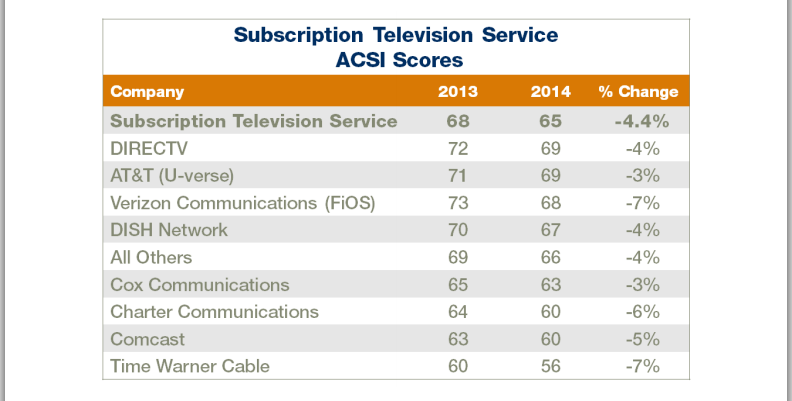 What that means for contestants in both markets is not immediately clear.

To be sure, to the extent that customer satisfaction is directly associated with customer loyalty, the rankings show relatively high unhappiness with most of the providers, and with the industry products compared to 41 others.

But relatively high dissatisfaction levels do not always result in product abandonment, especially when there are no reasonable product substitutes, or consumers judge all providers to have similar problems.

Cable TV services, for example, always have had “satisfaction” issues, and none of that stopped cable operators from growing to about 70 percent penetration before new competitors halted growth and began taking market share.

But competition arguably is growing in the ISP business, as it has grown in the video business.

Still, it is the video product that seems most exposed to potential new product substitutes, namely streaming over the top video.

At the same time, the ISP market arguably is in the process of evolving in a way that should increase satisfaction, ultimately, as the value-price relationship is reset, giving consumer much more bandwidth at equivalent prices (1 Gbps for $70 or $80 a month).

By way of comparison, mobile service got an ACSI score of 72. Fixed voice service scored 73/

Industries ranked between 85 at top and 63 on the bottom.

According to the American Customer Satisfaction Index, industry satisfaction scores fell 4.4 percent to an ACSI score of 65 after peaking at 68 in 2013.

The same might be true in the video subscription business. DirecTV and AT&T U-Verse scored 69, Comcast scored 60 and Time Warner Cable ranked lowest at 56.

And though AT&T is facing some skepticism about the wisdom of its bid to buy DirecTV,
customer satisfaction with fiber or satellite services is eight points higher than cable (68 compared with 60).

Note that DirecTV and AT&T scored highest in terms of satisfaction with video providers.