The last two percent of U.S. housing locations, as shown by the U.S. Federal Communications Commission National Broadband Plan and Broadband Availability Gap analysis, are the areas where the geographically-produced digital divide is most acute. 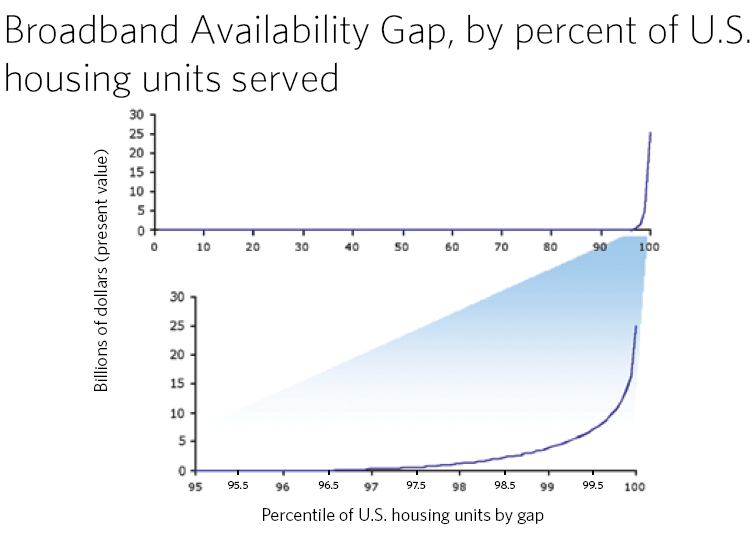 
Also, 99.8 percent of veterans have coverage of 5 Mbps/1 Mbps mobile LTE, based on required FCC reporting from service providers, about which there always is some dispute as to accuracy.


But those figures also are minimums, not typical or average, the FCC says. “We recognize, however, that actual speeds tend to be much faster than the minimum advertised speed reported on Form 477.” 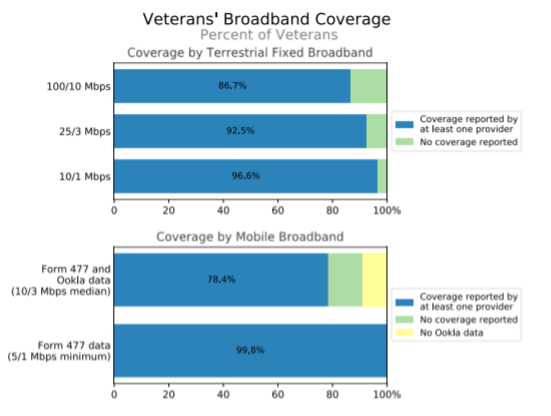 
The report concludes that 78 percent of veterans have coverage of both mobile LTE with a median speed of 10 Mbps/3 Mbps and any fixed broadband of at least 25 Mbps/3 Mbps.


Also, 76 percent of veterans have coverage for both mobile LTE with a median speed of 10 Mbps/3 Mbps and any fixed broadband technology of at least 100 Mbps/10 Mbps service.


The bottom line is that “FCC Form 477 deployment data suggest availability of broadband is not substantially different for veterans than for the population overall,” the FCC says. “For most veterans, broadband access is not the barrier to connectivity.”


That speaks to availability, not usage, of course. We sometimes confuse the ability to buy and use quality broadband with the actual consumer willingness to buy the product. We also sometimes conflate supply and demand: what is important is that quality broadband be available at affordable prices, not that consumers choose to buy one product over another.


There is a public policy that citizens and consumers are able to buy quality broadband. There is no similar public policy demand that they buy specific packages, from specific providers.


In other areas of public life, that distinction can be described as “opportunity,” rather than “guaranteed results;” the right to exercise a choice, not the right to specific products. In other words, some consumers choose to use mobile for internet access, not a fixed network product.


That can represent the exercise of choice (it is what the customer wants). It might also represent a market failure (supply is not available). It sometimes is argued that consumers make the mobile substitution choice because fixed network access is too expensive. Public policy advocates may differ on what “expensive” means.


Some would note that internet access in the developed world does not cost too much. In developed country markets, internet access costs about 0.7 percent of gross national income, per person, and is far below world averages.


As of 2017, approximately 85 percent of households with veterans reported that they had paid connections to the Internet in their homes. That is higher than the rate of internet access use nationwide, by some accounts.


Price arguably is not an issue, as that is in line with household fixed network internet access overall. Some 1.5 million veterans use the E-rate program providing low-cost internet access.


And there is growing evidence that prices really are not that big a problem (in terms of supply), based on income.


In Seattle, for example, rates of usage (actual buying behavior) between the highest-income and lowest-income neighborhoods varies by just four percentage points (97 percent the high; 95 percent the median; 94 percent the low).


For those veterans who do not buy broadband (even when it is available), barriers may include actual lack of facilities (if one excludes satellite access), willingness to pay, digital illiteracy or perceived irrelevance, the FCC notes. In a growing number of cases, though, mobile broadband is the preferred product, as consumers prefer mobile over fixed facilities for voice.

Estimates of mobile-only internet access households range from 10 percent to 20 percent of homes, and many believe 5G will lead to more substitution, as fixed and mobile access offers, combined with public Wi-Fi hotspot access, will keep gaining appeal as 5G speeds are able to satisfy a wider range of substitution use cases, and pricing plans make fixed and mobile access more directly competitive.
at May 02, 2019