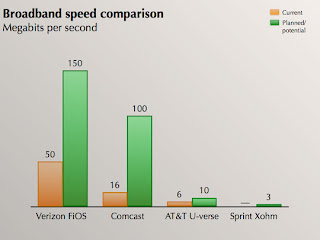 It's tough to maintain meaningful metrics in the communications business, in large part because the essential business inputs change over time.

Something along the same lines now will happen in the broadband access area, where counting "lines" once made sense, but increasingly will not capture business performance.

For starters, "average" speeds and "prices" will not be so useful as higher speeds become commonplace, rendering "average" price less meaningful than perhaps "average price per Mbps of service." Also, as wireless broadband becomes more prevalent, we routinely will begin to exceed 100-percent broadband penetration per household, in at least most households.
at December 23, 2008