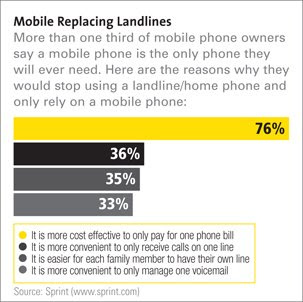 If survey respondents act the way they say they might, we could see an acceleration of wireline voice substitution during the recession.
Sprint sponsored a survey that found 32 percent of respondents are likely to eliminate their landline service and rely solely on a mobile phone in order to save money. About 18 percent of respondents already do not have landline phone service at their home.
When asked why they would give up their landline phone, 76 percent said they would disconnect in order to save money.
The findings are significant as all service providers are watching for signs of churn behavior, service downgrades and other actions consumers could take if they really are interested in saving money during the recession.
Some 36 percent of respondents say "a mobile phone is the only phone they will ever need."
The recession will end, of course. People will not have the same motivation to cut their landline service for financial reasons.  But there is one question we are not asking that will bear on demand for wireline voice service: if one argues there is a secular trend for people to abandon wired voice lines for wireless, one has to account for the reasons millions of consumers are keeping their voice lines, but moving them to cable providers.
The question might more appropriately be asked: what value-price relationship is compelling enough for people to continue using wireline voice? At the moment, part of the answer seems to be that the service still is viewed as useful, when it does not cost as much. Certainly that would seem to be the cable digital voice customer profile.
What nobody has had a chance to test on a wide scale is fixed broadband voice, delivered at a price so compelling the value-price relationship is changed. Someday we'll see such tests.
at December 18, 2008

Interesting, I think the next trend will be mobile lines replacing commercial landlines.

I think we may be witnessing wireline's last stand.