Consumer and IT Spending in Recessions: The Record 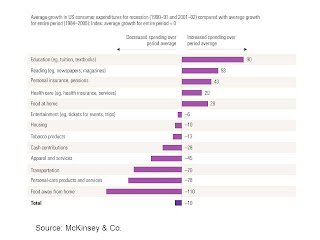 Recessions affect consumer spending unequally. During the 1990–1991 and 2001 to 2002 downturns, for example, U.S. consumers changed their priorities, instead of making across-the-board cuts.

Daily amenities such as eating out, purchases of personal-care products and apparel buying tended to suffer, according to analysts at McKinsey & Co.

But categories such as groceries and reading materials, which substituted for more expensive options, actually benefitted from higher spending, as did insurance and health care. Spending on education showed the biggest increase.

What one probably cannot glean from this particular set of data is that "communications" and "multi-channel video entertainment" spending does not change much.

During recessions, tech spending has historically fallen more than gross domestic product has, say McKinsey researchers. "Our research covering economic downturns in 50 countries over the past 13 years indicates that information technology spending typically fell five to seven times farther than GDP, with the most severe declines in hardware (which fell eight to nine times GDP and less severe ones in software and services, falling three to to five times GDP, McKinsey says.

The decline was much larger during the 2001 downturn because spending on computing and telecommunications equipment as a percentage of GDP (IT intensity) had previously soared to historic levels. A boom in tech start-ups, along with Y2K fears, promoted a spending surge on communications equipment, servers, and a range of other products.

When the economic slowdown arrived, start-ups foundered, many companies had too much tech and telecom capacity, and spending cuts across the economy were severe, McKinsey notes. Chastened by that experience, many companies have since
pressured their CIOs to manage IT more effectively.

As the economy enters the current slowdown, the growth of IT intensity is closer to its historic trend, even slightly below the 10-year average. Still, "it does seem likely that the sector’s experience could be more in line with historic trends than it was in 2001."
at December 23, 2008