National Broadband Plan: Where Does U.S. Rank? Where Can it Rank? 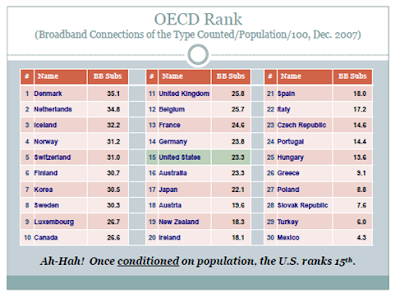 A six-spot gain to 9th place in international broadband rankings would be a successful outcome for the Federal Communications Commission’s National Broadband Plan, says the Phoenix Center.

Historical trends suggest the United States will likely move to 13th in broadband adoption by 2012 even without significant policy changes, however.

“As we point out in our prior research, relying upon the OECD’s flawed methodology as an
accurate metric of a country’s broadband performance is fraught with peril,” says Phoenix Center
President and study co-author Lawrence J. Spiwak. “However, as some policymakers continue to
use the OECD’s methodology as the definitive broadband metric, our analysis establishes a
performance metric by which to assess the success or failure of new broadband interventions using
the OECD’s rankings. In so doing, we hope that our analysis can make a positive contribution to
the debate by establishing a standard by which to measure the success of new policies.”

Many observers point to U.S. rankings on global indices of broadband penetration, cost or speeds as evidence that the United States is lagging behind other nations. But comparing very-large countries with very-small countries, with different population densities, government policies, household sizes and incomes is difficult.

For example, the United States ranks no better than 15trh in global measures of telephone density. But nobody really suggests the United States has a fixed-line voice availability problem. In fact, most observers say demand for that product is declining.

So where does the United States currently rank on per-capita measures of broadband penetration? 15th, as it turns out; precisely where it has long ranked in terms of fixed-line voice line penetration. If one is not a problem, why is the other?