What Does iTunes and App Store Behavior Indicate? 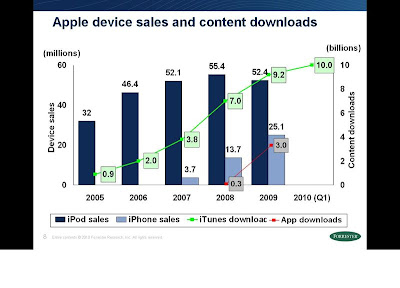 About 75 percent of iTunes digital music buyers are 25 or older, says Forester Research analyst Mark Mulligan. I admit I haven't been paying any attention to the demographics of iTunes downloaders, so that comes as a surprise to me.

Apple iPhone app "for fee" downloads, on the other hand, seem to be growing at a faster rate than iTunes songs did. I haven't seen age demographics on iPhone downloads, but it stands to reason that users 25 and older are the dominant iPhone demographic. In 2008 and 2009 it appears that about 30 percent of iPhone buyers were younger than 25.

The implication there is that iTunes and music downloads have not quite caught on with younger users as one might casually assume is the case. One might note that music purchases might be more common among users with higher disposable income, which would skew to older demographics.

One might argue that music is just as important to younger users as older users, but that sideloading or illegal downloads are the dominant acquisition method.

Mulligan's observation is that the music industry still has not found a way to increase the attractiveness of its product among the upcoming generations of consumers.

I'm not entirely convinced that conclusion is completely warranted. It might be the case that downloads are driven by users 25 and older, just as music downloads seem to be.

On the other hand, one has to note that gaming applications are arguably more popular with iPod "touch" users, use of which definitely skews to the teen market segment. I'm not sure how downloading of paid apps stacks up in that demographic.

One might argue that what iTunes and the App Store have shown is a clear value for users as a means of content and application distribution channel, irrespective of age. So far, "free" apps seem to constitute 85 to 90 percent of all downloads from the App Store.
at March 01, 2010

What Contribution Does FTTH Make to AT&T?

AT&T added a million fiber-to-home fiber-to-home accounts in 2021, the fourth consecutive year the firm has done so. AT&T says it b...