Does Device Screen Size Affect Data Consumption? Yes and No.

Is there a relationship between screen size and data consumption? One might think the answer clearly is “yes,” based on the difference between typical data consumption for smart phones and that of PCs.

Some studies of heavy smart phone users show consumption of perhaps 1.3 Gbytes. Other studies show average smart phone data consumption might already be up to 2 Gbytes. Still others suggest typical consumption runs between 600 Mbytes and 1.2 Gbytes a month. But smart phones on 3G networks might still consume a few hundred megabytes a month.

But PC users consume more data than tablet users or smart phone users. So it is reasonable enough to argue there is a relationship between screen size and data consumption.

But there are nuances. As screen sizes get bigger, people consume considerably more data, at least when connected using a Wi-Fi network, a study by OpenSignal suggests.

The study also suggests that when connected using the mobile network, mobile device screen size actually does not have much impact on the amount of data consumed.

On the other hand, there is only a weak correlation between screen size and data use over a mobile network connection. What this suggests it that people broadly use their mobile phones in the same way when on the move. Screen size does not change behavior.

Behavior does seem to change when larger screen devices have access to a Wi-Fi connection.  As screen sizes get bigger, people consume considerably more data.

SCREEN SIZE VS DATA USE OVER A WI-FI CONNECTION 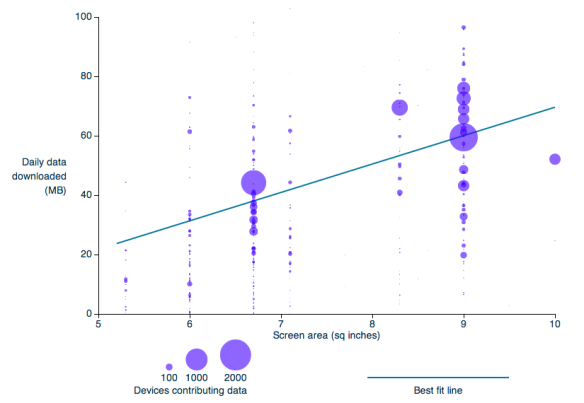