There are a few good reasons. First of all, use of huge amounts of new millimeter wave spectrum, open source radio technology and the relatively high cost of fiber-to-home networks in highly-competitive markets make 5G fixed wireless more attractive.

For starters, the initially installed cost of fixed wireless--even before 5G and millimeter wave spectrum availability--is lower than fiber to home, by a substantial margin. That is true for both the cost of passing a location as well as connecting a location. 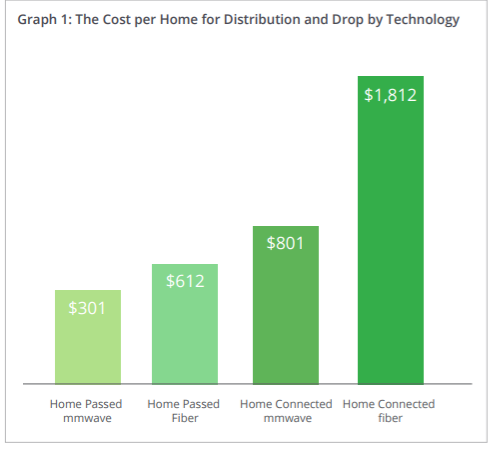 There is more. One crucial business model issue is the amount of stranded assets when deploying any new cabled network in a market where there is robust competition. To use an example, in a market where a cable company has 70-percent market share and a telco has 30 percent market share, a new FTTH network might still mean stranded assets (no customer attached) of at least 65 percent, assuming the telco can gain about five points of market share.

In other words, in highly-competitive markets where a competent competitor already has 70 percent of the installed base, fixed wireless might offer the only hope of remaining competitive, as the cost of FTTH might never prove sustainable.

Verizon’s FiOS FTTH network, even after years of marketing, topped out at about 40 percent take rates until perhaps 2018, when take rates broke above 40 percent. Keep in mind FiOS was introduced in 2005.

AT&T’s FTTH adoption rates seem to have been historically lower, at about 25 percent, though AT&T execs hope they eventually can boost those rates to somewhere in the 40-percent range over time (where FTTH is available). AT&T execs have sometimes said they believe they can reach 50-percent take rates. Some of us highly doubt that.

With cable operators having 70 percent of the installed base, typically leading in bandwidth and offered speeds, and with the next generation of cable modem service already being developed, to supply more symmetrical service at 10 Gbps, it does not seem that even FTTH is going to change the value proposition.

Essentially, FTTH only allows a telco to play catch up. So long as cable operators keep investing to maintain their lead, it seems unlikely FTTH will allow telcos to leapfrog the competition. Keep in mind that cable operators have been the U.S. broadband access market leaders since at least 1999.

The FTTH business case, for consumer customers, now seems irreparably damaged. But that is why AT&T, T-Mobile and Verizon are so focused on ways to use 5G and future networks to challenge all cabled networks as platforms for internet access. In the U.S. market, it may no longer be possible for at-scale FTTH to compete sustainably with cable operator services.

That includes using fixed wireless or even standard mobile access instead of FTTH. Though it might not have been so clear 20 years ago, once cable operator hybrid fiber coax emerged as a platform for consumer internet access, even FTTH was not going to be enough for telcos to remain highly competitive. In recent years, all net gains in accounts have been garnered by cable companies.