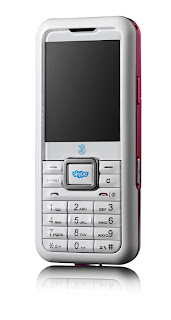 Hutchison Whampoa's mobile operator 3 has launched the Skypephone. The phone will be available on Friday in the U.K. market and also will launch in Australia, Austria, Denmark, Hong Kong, Italy, Macau and Sweden before Christmas, Hutchison Whampoa says.

3 will pay Skype royalties based on the number of active users of the service.

Hutchison Whampoa Group expects the phone - which has 3G multimedia capabilities, an MP3 music player and 2- megapixel camera - to sell by the hundred of thousands of units in the fourth quarter, and over the next few years he hopes to extend that into the millions.

It's an interesting experiment in "account control." If 3 customers make phone calls using Skype, Hotmail for messaging, Google for search and YouTube for television, it might devalue the operator. But 3 is taking steps not to kill itself. Initially, users will not be able to use SkypeOut to place calls to the public or mobile networks. Next year the feature is supposed to be enabled.

Customers trying to use the Skype service in countries where 3 doesn't have a presence will have to pay normal international data tariffs. So it might be cheaper in that instance to use the standard mobile calling feature as well.
at October 29, 2007

Email ThisBlogThis!Share to TwitterShare to FacebookShare to Pinterest
Labels: 3, Skypephone