Does Mobile Broadband "Cause" Economic Growth?

Though correlation is not causation, it might also be said that, in terms of the relationship between mobile broadband adoption and gross domestic product, the correlation might be positive, neutral or negative.


That is not what people tend to believe, or want to believe. But neither does evidence necessarily support the notion that mobile broadband causes, or leads to, economic growth.


That is not to argue against robust adoption of mobile broadband. The point is that it is not clear broadband adoption, in and of itself, actually leads in a direct way to economic growth.


That is not what one typically hears. Ericsson sponsored a study conducted by Arthur d. Little and Chalmers University of Technology to quantify the economic impact of broadband speed upgrades, at both the country and household levels.


The main conclusion was that doubling the broadband speed for an economy can increase gross domestic product growth by 0.3 percent on average in Organization for Economic Cooperation and Development economies.


The average increase in household income for a broadband speed upgrade of 4 Mbps to 8 Mbps is US$120 per month in OECD countries.


Households in Brazil, Russia, India and China benefit most by upgrading from 0.5 Mbps to 4 Mbps, at US$46 per month.


For households in OECD countries, there is a threshold broadband access speed to increase in earnings, somewhere between 0.5 Mbps and 2 Mbps on average. The greatest expected increase in income is for the transition from being without broadband to gaining 4 mbps, the
difference being around US$2,100 per household per year (equivalent to US$182 per month).


In BRIC households, the threshold level seems to be 0.5 Mbps. Rround US$800 additional annual household income is expected to be gained by introducing 0.5 Mbps broadband
connection in BRI country households, equivalent to US$70 per month per household.


Some might facetiously argue that limiting mobile broadband use might promote economic growth.  Nor is it completely clear that economic growth and fixed network broadband are causally related. People tend to assume that is the case, but it is tough to prove.


The point is that although the conventional wisdom is that broadband availability--fixed or mobile--”must” lead to economic growth, statistics do not uniformly support that conclusion.


There is no one obvious factor predicting mobile broadband penetration in these major countries, or the relationship to economic growth, one might well argue. 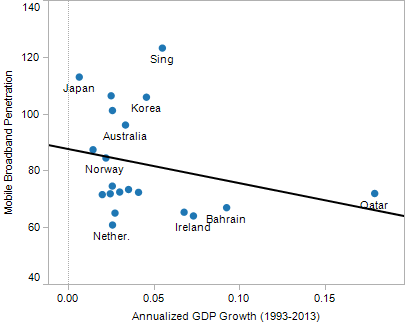 "There are just too many other factors that affect GDP growth for mobile broadband to have any significant and measurable effect,” said Yankee Group Research VP Declan Lonergan.
at October 16, 2013