U.S. Ranks 10th for Mobile Internet Speed: Why That is Not a Problem

Less often than in the past, one hears it said that the United States has a broadband problem. Costs are said to be too high, speeds too low, choice inadequate. That is true, in some locations, to some extent.

At times over the past decade, it has been argued that, where it comes to fixed network internet access, the United States was “behind” in either coverage, usage or speed.

The digital divide these days continues to be an issue in rural areas, but arguably is more complicated an issue since some users prefer mobile-only access and some people say they do not use the internet because they do not wish to do so.

Some might also argue that the way people and nations use the internet also matters, not simply availability, price or speed.

International comparisons can be instructive, though sometimes not for the reasons one suspects. Consider voice adoption, where the best the United States ever ranked was about 15th, among nations of the world, for teledensity.

For the most part, nobody really seemed to think that ranking, rather than higher on the list, was a big problem, for several reasons. Coverage always is tougher for continents than for city states or small countries. Also, coverage always is easier for dense urban areas than rural areas. The United States, like some other countries (Canada, Australia, Russia) have vast areas of low population density where infrastructure is very costly.

On virtually any measure of service adoption (voice or fixed network broadband, for example), it will be difficult for a continent-sized market, with huge rural areas and lower density, to reach the very-highest ranks of coverage. 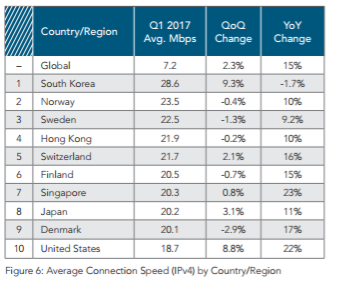 Thanks for sharing this Information. Broadband Speed Test