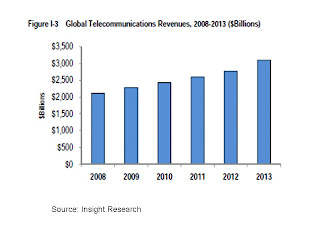 Between now and 2013, a time when global communications service provider revenue will climb from $2 trillion to about $3 trillion, wireless is going to be a key factor.

Whatever else happens, mobility services in developing regions are going to play a big part in that growth.

In developed regions, pressure on landline voice revenues will be the challenge. In developed regions, service providers will have to create new services based on wireless and broadband, especially services that combine formerly-separate experiences such as voice, image, video, audio, text, presence, location independence and devices.

Nothing is certain, in that regard. History suggests that service providers, even those deemed to the most slow-moving, can replace their revenue mainstays. Wired telephone services providers, generally considered the slowest-moving contestants, already have twice done so.

It remains unclear whether, in the next iteration of industry business models, there will be a single revenue source that clearly underpins all the others, even though this has been the classic model. The only thing that is clear is that, as important as wireless is, it also will someday fade as the key industry revenue driver.
at October 29, 2008