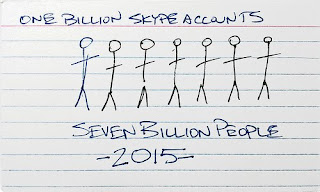 Skype Technologies expects it will reach one billion registered users, nearly double its current registered user base, by 2015, and half those customers were be business users, says David Gurle, Skype VP.

Business customers will bring in 20 percent to 30 percent more revenue on average than consumers, Gurle predicts.

Since 2009 revenue was $716 million with a bit more than half a billion accounts, if accounts nearly double to about a billion, then Skype income could hit the $1.5 billion level in 2015.

Email ThisBlogThis!Share to TwitterShare to FacebookShare to Pinterest
Labels: Skype