Will Apple "Blow Google Out of the Water?" 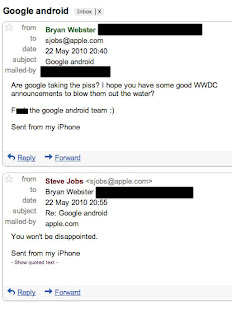 Google used the occasion of its developer conference to jab Apple. Will Apple take the opportunity at its June 7 meeting to jab back? Most people think it likely will.

"If Google didn't act, we face a draconian future," said Goolge VP Vic Gundotra at Google's recent developer meeting. "One man, one company, one device would control our future," said Gundotra.
At its upcoming Worldwide Developers Conference, Apple is expected to detail its new iPhone operating system, OS 4.
http://www.macrumors.com/2010/05/23/steve-jobs-on-wwdc-announcements-you-wont-be-disappointed/
at May 25, 2010