Is the U.S. Ahead, Behind or at Par, in Terms of Broadband Speed, Price? Answer: Don't Blink

Whether the United States is ahead, behind or about par in the area of fixed network broadband speeds and prices seems always to be contentious. In fact, you can find, without looking too hard, analyses that claim the U.S. market is “behind” others.

It isn’t hard to do. A few nations, typically including South Korea, Singapore, Hong Kong and often Japan, are cited as the world leaders in typical, average or minimum speeds, year in and year out. That much is not in dispute.

The latest version of the “U.S. is lagging” analysis comes from the New America Foundation, which argues that “in comparison to their international peers, Americans in major cities such as New York, Los Angeles, and Washington, DC are paying higher prices for slower Internet service.”

Furthermore, the report emphasizes that “our data also shows that the most affordable and
fast connections are available in markets where consumers can choose between at least three
competitive service providers (fixed network only, as there also are satellite and mobile ISPs in virtually every market).

Suffice it to say, some studies show U.S. typical speeds are higher than is common in Europe, for example. Other studies show that more than 80 percent of American households live in areas that offer access to broadband networks capable of delivering data with speeds in excess of 100 megabits per second.

A study by the International Telecommunications Union argues that U.S. broadband actually is more affordable than in most other countries.

To be sure, never tends to rank much better than eighth on any survey of global teledensity or Internet access speeds. There are reasons for that, such as the continental-sized land mass, longer loop lengths, lower population densities and even consumer preferences.

In the end, what matters is that the U.S. market is highly dynamic. In many of the cities cited by the New America study, there are municipal broadband networks whose prices for gigabit service recently were reduced from about $300 a month to about $70 to $80 a month. That’s progress, you might argue, but the bigger story is the amount of dynamism in the market.

It isn’t just Google Fiber launching gigabit service for $70 a month. It is the upgrades other ISPs are undertaking, the significant and growing role played by mobile Internet access, and expectations that speeds will continue to grow at a healthy clip. Snapshots are fine, but the U.S. Internet access market never stands still.

In fact, U.S. Internet access speeds double about every five years. And it is reasonable to project speed increases of two orders of magnitude within a decade.

Though it is an argument some might continue to make for some time, Internet access speeds and prices really are not going to be a significant problem in the U.S. market for long, even if some believe that is the case right now. 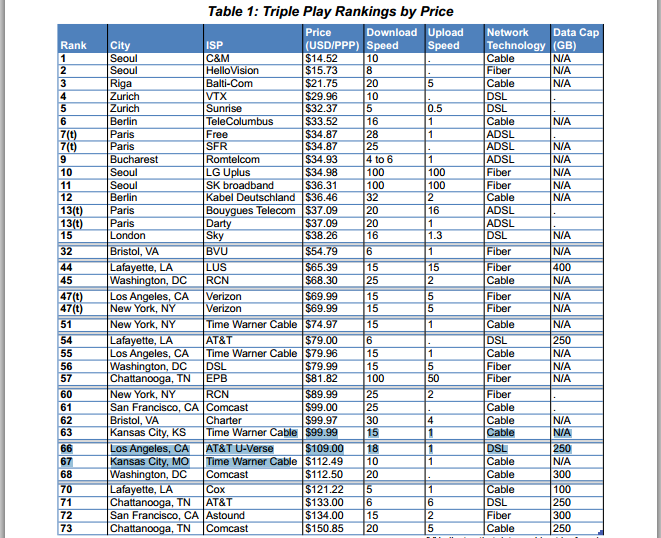