How Can Telcos Create New Value as OTT Cannibalizes Industry?

It will come as no surprise to anybody who follows the industry that value in the communications (internet) ecosystem is shifting from access to apps.


Access provider share of the ecosystem profit pool has declined from 58 percent in 2010 to 47 percent in 2015 and is forecast to fall further, to 45 percent in 2018, the World Economic Forum (WEF) says. Among the beneficiaries are digital content creation, distribution and aggregation companies such as Google, Netflix and Facebook.


Together with device manufacturers, the combined share of industry profits of these segments (apps and devices) is expected to increase to 40 percent in 2018, up from 29 percent in 2010.


“Telecom players, already lacking OTT businesses in this respect, face a real threat of being left to compete on two inherently contradictory fronts – price and throughput – that could put margins under further pressure,” says the WEF. “Telcos could be left to compete as IP-connectivity pure plays.”


“In the extreme scenario, increasing commoditization of the core offering could see margins drop to the levels of utility companies,” WEF says. 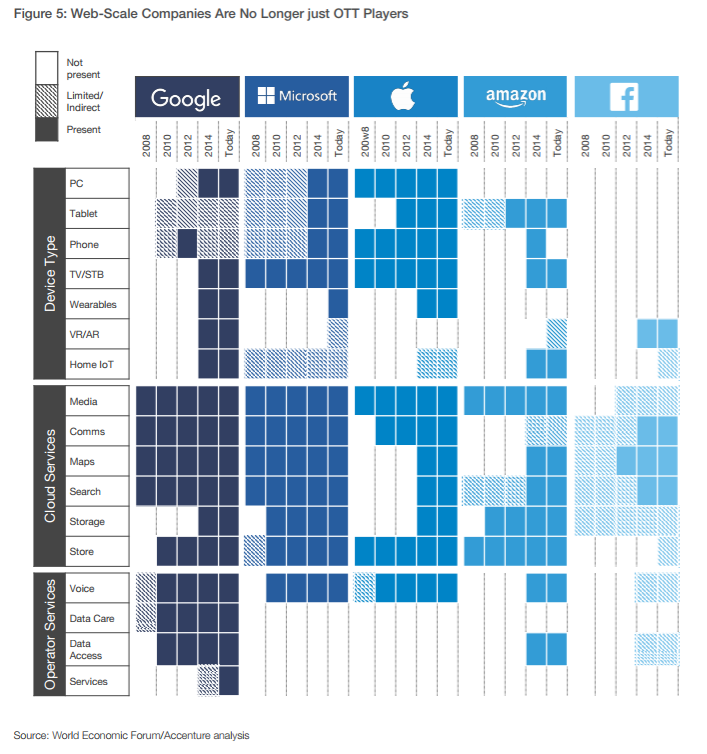 
“Over-the-top (OTT) applications generate 50 percent to 90 percent less revenue for communications service providers,” the World Economic Forum says. “While the exponential rise in data consumption has provided some relief, this has not been enough to overcome the consistent decline in mobile voice average revenue per user (ARPU).”


Web-scale players such as Google, Microsoft and Facebook are moving quickly to fill key gaps in core telecom services and connectivity, as well. Google Fiber, Project Loon and Project Fi are examples of what Google has been doing.


Facebook is developing open source public network standards, in addition to the open source data center standards it already has developed, and is using.


All that is driving a search for new business models and revenue streams. The World Economic Forum believes that search will require strong collaboration with vertical industries and internet platforms.


In large part, competitive advantage in digital services and IoT will be driven by the capability to collect and analyse large pools of data specific to vertical-market use cases and to target value opportunities through customization of services and offerings, WEF says. 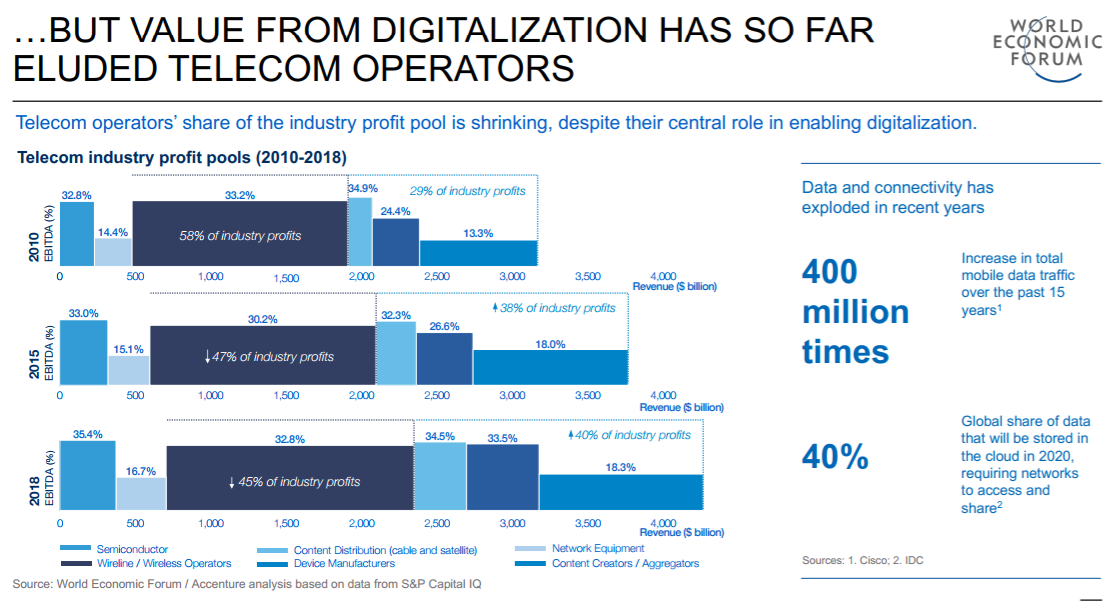 
WEF believes virtualization and an abstraction of the physical hardware layer, to create self-optimizing and secure zero-touch networks will represent the value from next-generation networks.