Do Smart Phones Really Lengthen Your Work Day by 2 Hours? Much will be made of a study sponsored by Pixmedia that reportedly shows Britons work an additional 460 hours a year, on average, because of smart phones that allow them access to their email.

The study by technology retailer Pixmania supposedly shows the average U.K. working day is between nine and 10 hours, with an additional two hours a day spent responding to or sending work emails, or making work calls.

Some will question the validity of "self reported" work hours. U.S. government surveys tend to show that although U.S. employees "work longer hours" than they used, to, the differences are relatively slight.

Numbers from the U.S. Bureau of Labor Statistics show a very gradually rising trend through the 1990s that has only just recently tapered off, hovering somewhere just north of 40 hours weekly.

To be sure, the notion that people are being asked to work longer hours seems intuitively true, given job cuts since the Great Recession of 2008. The simple reality is that if the same amount of work has to be done, and there are fewer people to do that work, hours will lengthen.

Also, some employers deliberately are choosing to employ fewer workers, but pay overtime, rather than hire new workers. All of that will tend to lengthen the average workday. Smart phones might have almost nothing to do with the trend.

A survey sponsored by global professional services company Towers Watson and WorldatWork, an international association of human resource professionals, shows that nearly two thirds of respondents expect their employees to work more hours now than they did prior to the 2008 Great Recession and see this trend continuing for some time.

Without access to the actual Pixmania research methodology, it is difficult to assess the validity of the claims. But some might question whether typical self-reported daily work hours really do amount to 12 hours, with or without smart phones.

More than 90 per cent of office workers have an email-enabled phone, with a third accessing them more than 20 times a day, the study apparently found. That has the ring of truth, but does not necessarily translate to a "longer work day."

Almost one in ten of the Pixmedia respondents said they spent up to three hours outside their normal working day checking work emails, and even those without a smart phone check emails on their home computer. Some checking is quite plausible. "Three hours" seems implausible. 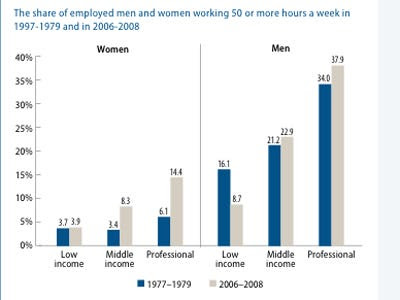 In other words, high-income workers do work longer hours, but lower-income workers spend less time on the job.
There is some truth to the notion that 40 hours of work is sort of considered "part time" work.
During most of the 1900s, the hours of work declined for most American men, NBER says.  But around 1970, the share of employed men regularly working more than 50 hours per week began to increase.
In fact, the share of employed, 25-to-64-year-old men who usually work 50 or more hours per week on their main job rose from 14.7 percent in 1980 to 18.5 percent in 2001.
This shift was especially pronounced among highly educated, high-wage, salaried, and older men. For college-educated men, the proportion working 50 hours or more climbed from 22.2 percent to 30.5 percent in these two decades, NBER says. 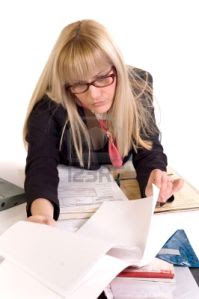 Between 1979 and 2002, the frequency of long work hours increased by 14.4 percentage points among the top quintile of wage earners, but fell by 6.7 percentage points in the lowest quintile. There was no increase at all in work hours among high-school dropouts.
The point is that long term shifts in work hours might be occurring, but there also are likely impacts from economic conditions, the nature of work, the places where work occurs and the motivation to do such work. Smart phones are only a way of doing that work, not its cause.
at October 31, 2012