Among the big changes in the telecom business over the last three to four decades, one of the most prominent is the growing revenue contribution (and profit contribution, in many cases) made by consumer accounts, as opposed to business customers.


That was not always the case. In the past, super-high profits from business customers funded operation of networks also serving consumers.


These days, it is consumer revenues that lead growth for most service providers.


The other big shift is the relative contributions made by mobile, as opposed to fixed, revenues.


As I mentioned during a recent keynote address for Telegration business partners (a U.S.-based sales organization focusing on enterprise and mid-market customers), when conducting analyses of Internet adoption on a global basis, one can essentially ignore all fixed network access, look only at mobile Internet access, and still get the trend right, and the magnitudes of usage about right.


That is quite a change from historical patterns, where business user revenues accounted for about a half of total revenues in developed countries. But the direction of change is mostly towards greater consumer revenues (What EY calls “smart operator”).


A few service providers might opt for becoming “mostly” wholesale providers for retail partners, in which case the revenue contributors shift dramatically to “business” revenue (wholesale). So far, we see little evidence that service providers are willing to retrench as wholesale capacity suppliers, however.


And that means the percentage of revenue earned from consumers is going to dominate, in the future.


Except for about 10.5 percent of Internet users in Asia, for example, who do get access using a fixed network, substantially all the rest of the Internet users do so using mobile networks.


In some Asian countries--such as the Philippines and Thailand--perhaps 20 percent to 25 percent of people use a fixed Internet connection (primarily urban residents). But in many other countries, usage of fixed Internet access can be in single digits, or less than one percent.


As we start to connect the half of people who do not presently use the Internet, the percentage of mobile or wireless users will climb, while the percentage of fixed network users shrinks. And we are talking about roughly two billion new Internet users, in Asia alone.


That is not to say other access methods will not emerge, but it is hard to ignore the fact that nearly 90 percent of Internet access in Asia now is provided by mobile networks.


Rural coverage, language relevance, device prices and recurring access costs all are issues. Still, mobile has to be reckoned the primary delivery vehicle.

Will that change in the future? It is possible. If Internet of Things develops as a key revenue driver, then enterprise or business revenue contributors will grow, again. 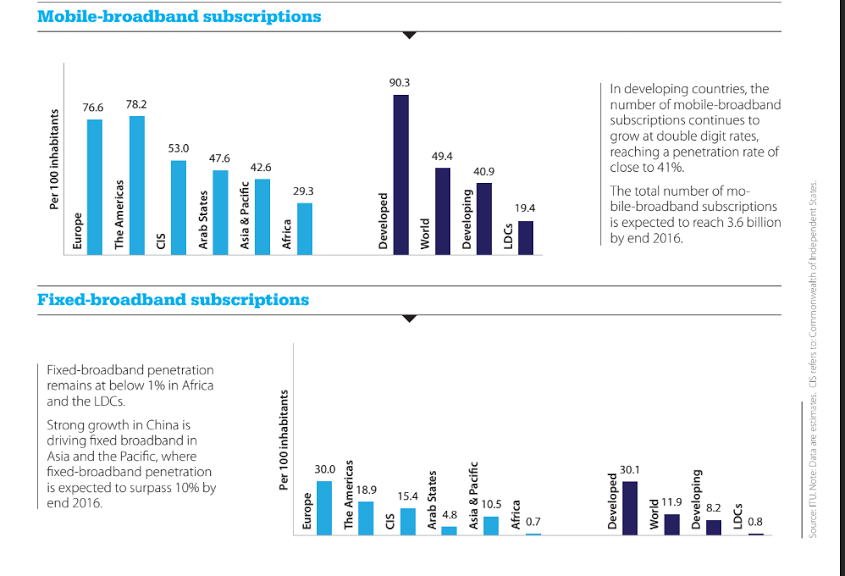 
Bringing stakeholders together to understand changing supply and demand issues, and the business model for Internet access, is a key focus of the Spectrum Futures conference. Here’s a  fact sheet and Spectrum Futures schedule.