The cloud-based “unified communications as a service” business remains a market heavily tilted to the United States. In fact, the leaders of the UCaaS business globally are determined in large part by their market positions in North America, and in particular, U.S. market share.


One would be very hard pressed to name another communications service that is so concentrated in terms of buyers (by region). One would therefore be tempted to say that cloud-based UC has not yet gotten much traction anywhere outside North America.


Whether that means there is huge unmet potential (undoubtedly true) or huge indifference, is hard to say. If the cloud trend is real, and most would agree that it is, then most of the eventual sales have yet to be made.


Cloud computing is important, some might argue, because cloud computing represents the next wave of computing architecture, as there were earlier waves of mainframe, minicomputer and PC-based computing.


IDC predicts  that the collaborative applications segment of the U.S. SaaS applications market grew 10.6 percent year over year in 2012 to over $2.6 billion in revenue.


Current market research indicates that Web conferencing and videoconferencing and UC are at or near the top of the list of applications most likely to move to the cloud, IDC says.


Synergy Research Group suggests a handful of leading U.S. cloud UC services suppliers, representing about half the U.S. market, earned about $84 million a quarter in the second quarter of 2013, suggesting those firms represent an annual market north of $340 million. If one assumes that is half the U.S. cloud UC market, then annual revenues would be in the $680 million range.


Together, four providers account for nearly half of UCaaS subscribers. 8×8 is the market leader, with 19 percent of subscribers. RingCentral, Vocalocity, and ShoreTel follow, with 10 percent, nine percent, and eight percent, respectively.


While the cloud UCaaS market as a whole grew 22 percent year over year in the second quarter of 2013, Vocalocity grew 45 percent while ShoreTel grew 37 percent.


Suppliers iCore, RingCentral and 8x8 all saw year-on-year revenue growth in the 18 percent to 22 percent range. In aggregate the six market leaders accounted for 54 percent of total quarterly UCaaS revenues, with 8x8 maintaining its overall market share lead at 15 percent. 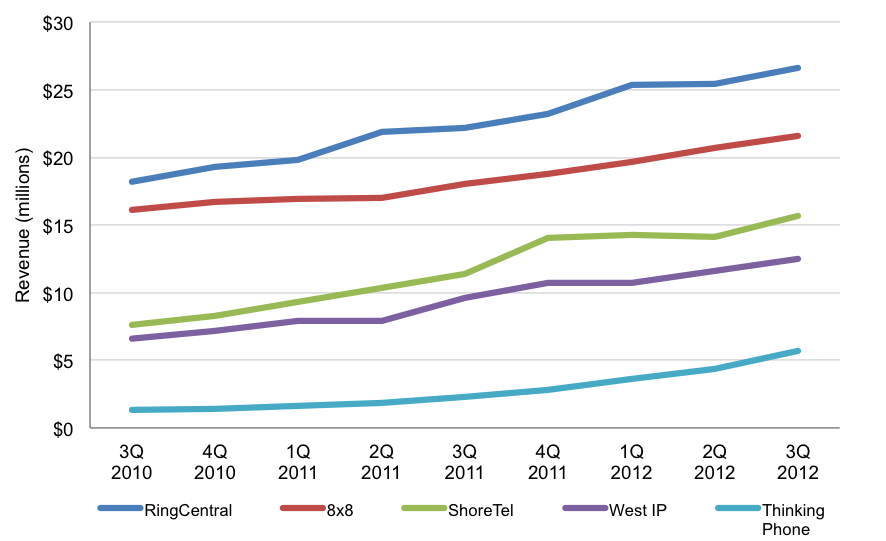 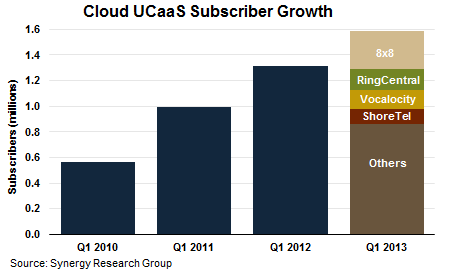 For some of us, the big question is why cloud-based UC resonates in the U.S. and North American market so well, and yet appears to lag so much in most other world markets.
at September 02, 2013