There are at least two areas in which there are potential implications for the Internet ecosystem and its suppliers, generally positive for mobile app and mobile ISP providers, as well as mobile device suppliers, and at least modestly unhelpful for suppliers of fixed ISP providers and PC suppliers.

But the growing trend to use mobile devices for Internet apps and services also suggests a significant user population prefers mobile access, and believes a mobile device is a suitable substitute for a PC or notebook computer.

Also, there are some policy implications. The first implication is that, as always, consumers might choose not to buy some products that are made available to them. In other words, differences in purchasing behavior are not always or necessarily caused by “defects” of supply.


People make rational choices about products and services, and they might prefer mobile access to fixed access. Policymakers have to avoid regulating or legislating as though differences in consumer buying are necessarily "problems." They might just be a reflection of consumer choices.

Such mobile-mostly Internet users account for 21 percent of the total mobile phone user population. Young adults, non-whites, and those with relatively low income and education levels are particularly likely to be mobile-mostly users.


That same trend is expected to emerge in many developing nations as well.


Some 53 percent of mobile Internet users say that they mostly go online from a device other than their mobile phone, while 11 percent say that they use both their phone and some other device or devices equally.


Since at least 2011, young adults, non-whites, the less educated, and the less affluent have said that they go online mostly using their cell phone at consistently high rates, Pew researchers say.


Among those who use their phone to go online, 60 percent of  Hispanics and 43 percent of African-Americans are mobilel-mostly Internet users, compared with 27 percent of whites, say Pew researchers.


About 50 percent of mobile Internet users ages 18 to 29 mostly use their phone to go online.


Some 45 percent of mobile Internet users with a high school diploma or less mostly use their phone to go online, compared with 21 percent of those with a college degree. 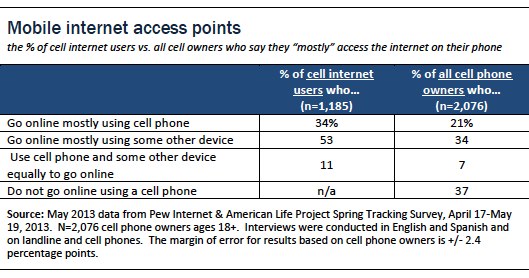 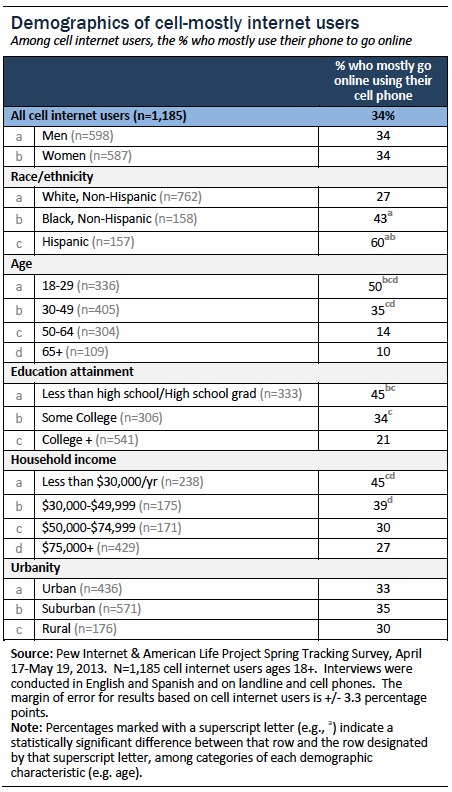