For some carriers, the issue is simply a need for additional capacity.

Though carriers expect and hope that some incremental revenue can be generated, the strategic issue simply is that more spectrum is required, with or without the expectation of immediate net revenue growth from "new services."

The ability to support current customers and demand is reason enough to add more capacity.

In a few cases, 4G has additionally had at least a temporary perceived advantage. Sprint thought its embrace of WiMAX was that sort of decision, allowing it to move first and uniquely in the 4G services market.

In the United Kingdom, EE was able to launch 4G in former 3G spectrum, before the holding of 4G auctions or the building of the new networks.

For some attacking carriers, 4G is a weapon to continue a price assault, as Free Mobile is doing.

Still, contestants sometimes have paid too much to acquire assets. That was true of some Western European operators who, in retrospect, paid too much for 3G spectrum.


Service providers have become wary of such excesses, and auctions for fourth generation Long Term Evolution spectrum, while high in some cases, have not reached levels seen in a few 3G auctions.


But even “rational” decisions can be uncertain, in highly competitive markets.


In the case of a few 3G auctions, one might argue the problem was not the high cost of spectrum, but the low amount of new revenue, and the delay in “discovering” important new apps, which wound up being mobile email, and then mobile Internet access and then personal Wi-Fi hotspots.


In that regard, the danger with LTE auction prices is not so much the absolute cost of new spectrum, which is in some ways a necessary precondition for remaining in business in the future.


The danger is that that increased outlays for spectrum are not fully offset by new revenue streams, or at least higher revenue streams, even if important new apps do not appear immediately.


In markets where customers assume their is a price premium for getting access to LTE’s faster speeds and lower latency, the revenue model is clear. The bigger problem is markets where LTE investments are made, but there is no pricing premium.


That isn’t to say there is no value. Faster speeds and lower latency might well discourage customer churn. But if all major competitors in a market can offer LTE, then the value as a marketing platform is reduced.


Faster networks have value, to be sure. But it is hard to measure the competitive value if all service providers also offer faster speeds.


In the past, supporters of LTE have argued that the real immediate value is the greater bandwidth efficiency of 4G, compared to 3G, used to support data bandwidth. Nor is there doubt that ownership of more spectrum, in markets where demand for data access is growing, has value.


But is has to be disconcerting that LTE access carries no price premium at all, for at least some providers.


French mobile service provider Free Mobile has added an LTE 4G high-speed broadband service to its Free Mobile package without raising the price, in a market where its chief rivals charge a premium for using the 4G network. 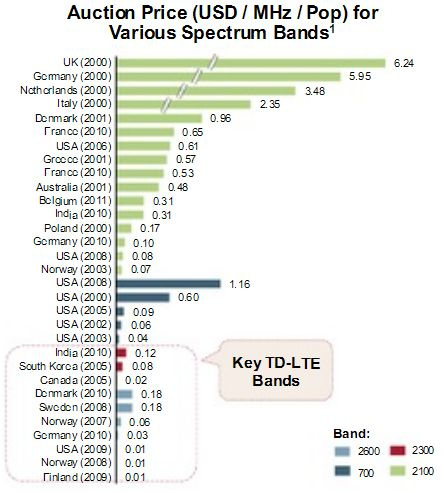 Iliad says its monthly Free Mobile subscription remains unchanged at 19.99 euros a month including 4G, without a long-term contract. The no incremental charge policy has a clear logic, of course.


Illiad expects it can use its pricing advantage to further attack the bigger carriers, taking market share. So in the case of Free Mobile, the revenue model is “new subscribers,” not incremental revenue from offering customers a faster network.


Recently, mobile operators in India have faced the problem of revenues insufficient to allow recovery of investments, as well, unrelated to the particular problem of spectrum costs.


India's Bharti Airtel, for example, bought Zain's African operations in 2010 for $10.7 billion, considered a high price at the time, to gain access to the high growth potential in Africa. But competition has lead to low retail prices.


Bharti's average revenue per user grew eight percent from 2012 levels to 192 rupees in India and fell 10 percent in Africa.


For the moment, though, the big incremental decisions turn on spectrum investments.


Since no company invests capital without anticipating a return, every buyer of LTE spectrum has an explicit revenue model. In some cases, there also is an operating cost model (LTE offers lower cost per bit).


But what one hopes is not the case that investments in LTE, or investments in fiber to the home, are not ulimately a matter of “you get to keep your business.” In other words, as many fiber to home investments have largely been made to trade market share with a key competitor, it is not always the case that a traditional return on investment thesis drives the decision.


Instead, the investments are defensive in nature, more a strategic investment than a traditional “high return on investment” decision.