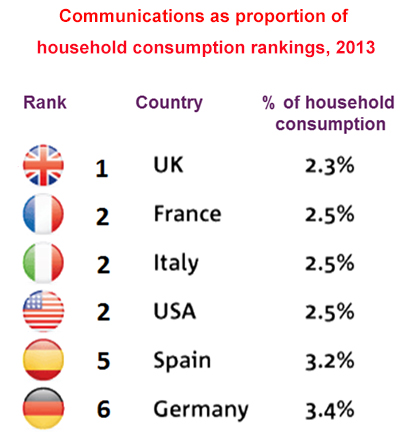 According to a recent study by Okcom, the U.K. communications regulator, residents in the United Kingdom pay 2.3 percent of household income on communications services.


In France, the United States and Italy, consumers pay 2.5 percent.


To create the index, Ofcom created five household profiles, ranging from a low use household with basic needs, through to an affluent household that uses lots of communications services.


Ofcom then identified the best deals available in each country that matched the needs of these households.


The United Kingdom was either the cheapest or second cheapest in four out of five of the profiles.


While U.K. prices were consistently cheaper, not all communications services were the most competitive relative to other countries.


Some caveats are in order. A different report notes that U.K. household spending on telecom grew 27 percent between 2002 and 2011, but on an inflation-adjusted basis fell two percent over  that period.


So it is not clear that real prices and current prices are completely aligned.


Nor do the indices incorporate changes in product definition or quality. In 2002, most people did not buy Internet access, and what most people did buy was dial-up or lower-speed broadband.


Speeds have tripled between 2009 and 2013, for example. So no matter what the absolute price, the product is qualitatively different.


The same sort of issue exists when comparing subscription TV packages, which vary, in terms of channels provided, from country to country.


Actual purchasing behavior also is important. Packages might be available, even widely available, but be purchased by relatively few consumers. Prepaid plans, though widely purchased in many markets, are relatively low-penetration products in the U.S. market, for example.


The point is that It’s always difficult to compare costs and income, revenue and spending across countries globally.