Will T-Mobile US (and someday Sprint) Achieve Iliad Free Mobile Levels of Success?

Whether T-Mobile US ever will fully realize the fruits of its “Uncarrier” strategy to shake up the U.S. mobile industry is unclear, simply because T-Mobile US might not exist, as an independent company, in a couple of years.

Also unclear is whether the “Uncarrier” strategy can be as successful an assault on market structure as SoftBank accomplished in Japan and that Illiad’s Free Mobile is doing in the French mobile market, namely, to significantly change both market share and industry pricing levels within two years.

In the two years since the Free Mobile launch in January 2012, mobile prices in France have fallen, in large part because the bigger incumbents have had to lower their retail prices. Orange, for example, in 2012 lowered mobile data prices on some packages by 60 percent, while increasing data allowances 300 percent.

That isn’t the first time Illiad has disrupted the French market. Iliad in 2002 launched its “Freebox” fixed network broadband service. What is different is the speed of disruption.

But by the end of its first year in service, Illiad Free had in December 2012 nearly as many subscribers as it has gotten for its fixed network service in 10 years.

At the end of December, 2012, Illiad had over 5.3 million broadband subscribers and 5.2 million mobile subscribers, representing market shares of over 24 percent in the French fixed network broadband business and almost eight percent in the mobile business.

Whether T-Mobile US would be able to, or will ever, gain 11 additional market share points in two years is the issue.

Whether T-Mobile US could gain 36 percent incremental market share over a decade, as Illiad has done in its fixed business,  also is an issue.

In the first half of 2011, Iliad gained 36 percent market share of French broadband net additions, of which 80 percent were new subscribers opting for its new offer branded “Freebox Revolution,” and offering a triple play service (some might call it a quadruple play) including broadband Internet access, digital TV, gaming and a fixed phone line which includes unlimited calls to mobile phones on any domestic networks, for EUR29 (about $40) a month.

But Free’s disruption continues. Now Free Mobile plans to lease high-end smartphones to subscribers of its low-cost Free Mobile packages, a move that will hit squarely on the most-profitable part of the incumbent mobile service provider business.

Up to this point, Free Mobile has required that its subscribers buy their own phones, outright.

Customers must return the phone after two years. In the U.S. market, most mobile virtual network operators have had the same "buy your own device" approach, in part because the cost of offering bundled phone plus contract service plans was too high.

Recently, U.S. providers have moved to "installment plans," eliminating the bundle, but still allowing consumers to buy their devices over time. Free Mobile now is moving to outright device rentals.

Iliad's packages are different from the sales model used by its competitors, in which customers who sign two-year contracts of at least 20 euros a month receive an upfront subsidy worth 300 euros or more on a smartphone.

Iliad's lease offer represents a discount of about 40 percent on the cost of buying an iPhone 5S and then taking out a Free Mobile monthly plan.

So far we have moved from outright purchase to installment payment. Might rentals be next? 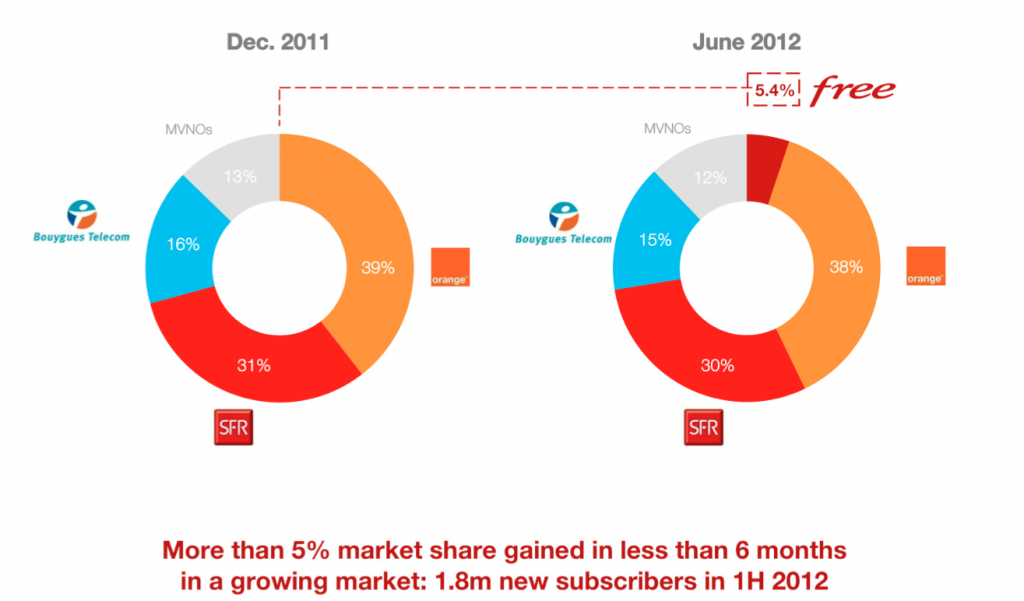