Does VoIP Cost 3 Times as Much as PSTN Voice?

The Internet and Mobile Association of India claims a VOIP call costs three times more than a traditional voice call.


"It is a myth that OTT communications are cheaper than the traditional calls," the group insists.


That might strike you as an odd statement. You would be hard pressed to find a single example, anywhere, where making a one-minute VoIP call costs more than a one-minute call, to the same location, using mobile or fixed networks.


The statement only makes sense when looked at it in terms of “total cost of ownership” or “total cost of use” for the customer, even when most consumers likely do not calculate costs in that way.


To the extent the statement is “true,” it is largely a function of high mobile data tariffs, not the actual cost of using VoIP or over the top messaging.


The association says a 60-minute call over IP can consume around 25-35 MB for voice alone and 240 MB for video plus voice.


"A one-minute voice call on Skype to Skype will cost on an average Rs 3 depending on bandwidth (HD Video) and connection speed on 2G or 3G. This translates to Rs 180 per hour or more, which is almost three times the cost of an average call per hour on a normal subscriber," it said.


That sort of price differential is large enough that one would expect consumers to behave rationally, and use the cheaper service. If they are not doing so, something else is going on. The “something else” is that consumers do not include the cost of bandwidth when evaluating the cost of making a call or sending a message.


They apparently only look at incremental cost. As when a consumer evaluates the cost of watching an OTT movie, the actual total cost--including sunk costs--is not relevant.


Consumers look only at the incremental cost--”how much will it cost to watch this movie”? They do not calculate the cost of bandwidth. The same process apparently affects use of OTT messaging and voice.


As usually is the case when Internet-based services confront legacy services, policy decisions directly affect business models. In principle, two methods could be used to create a level playing field.


Rarely is the choice made to reduce regulations for all providers in a market, to the level of the least-regulated industry segment.


“If the pricing for all services (including VoIP) will be the same, then the current tariffs of voice (75 paise/minute), SMS (20 paise/SMS) and data (25paise/MB) will have to converge to anywhere between 108 paise/MB to 250 paise/MB for data just to maintain the current revenue,” Idea Cellular has argued.


Generally speaking, service providers and Internet app firms might agree that overall ecosystem costs in India are too high. In part, that is caused by regulatory burdens, but also by lack of spectrum.


“India has 40 percent of the spectrum that any other country has,” TRAI Chairman Rahul Khullar has said.


There are only two ways to fix this: either by making more spectrum available or by using it far more efficiently,” Trai chairman Khullar said. 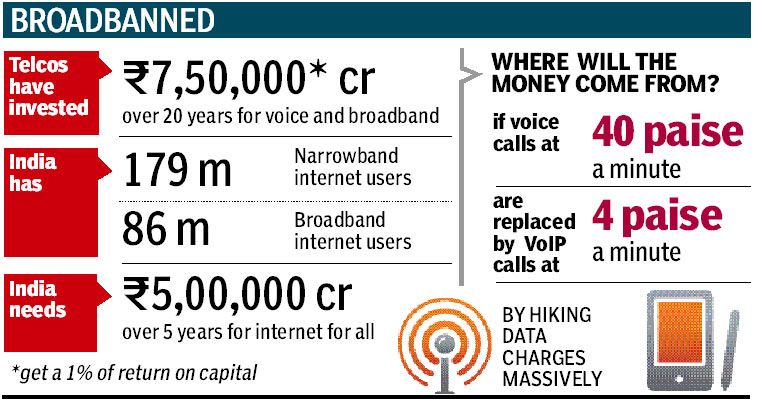