The global Long Term Evolution fourth generation market doubled in size to 445 million users in 2014, with annual growth in the number of LTE users will remain above 70 percent between 2015 and 2016, according to Digitimes Research.


By 2016 there will be 1.466 billion LTE users, representing 70 percent of the total number of global mobile broadband (3G and 4G) users.


Driving that growth is the Asia-Pacific region, especially China. The Asia region will surpass North America to become the world's largest consumer LTE market
in the first half of 2015.


China LTE subscribers are the reason Asia has so many LTE subscribers. South Korea is among the countries with high LTE adoption rates, at about 59 percent of all mobile users on the LTE networks there. 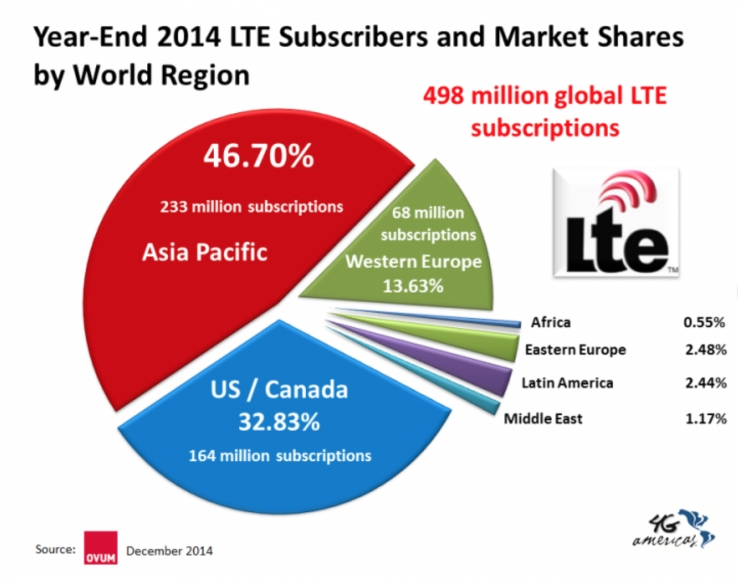 LTE-Advanced deployment also is a major industry trend. Some 116 mobile operators, about 30 percent of all LTE operators, are investing in carrier aggregation technology worldwide and are at various stages of deployment.


Some 17 percent of LTE operators have commercially launched LTE-Advanced service.


Most LTE-Advanced system deployments support speeds of 150 Mbps up to 300 Mbps downlink and 50 Mbps on the uplink.


Globally, 393 operators have commercially launched LTE systems in 138 countries, according to the Global mobile Suppliers Association.

About 644 operators are investing in LTE  across 181 countries. GSA predicts there will be 460 commercially launched LTE networks in operation by the end of 2015.
at May 19, 2015