Virgin Media is Biggest Competitor to BT in High-Capacity Wholesale

One notable observation is that in the higher-speed Ethernet wholesale, Virgin Media has higher market share than BT.


According to Ofcom, about two percent of capacity sales are for dark fiber, and most of those sales take place in the London market. Fully 95 percent of sales are of lit services (Ethernet and wave division multiplexed services).

High-capacity leased lines are important products. Service providers make reasonable profit margins and gross revenue on such connections, while enterprises and large organizations depend on them.


Such networks are relatively expensive, as well, so there often are few alternate suppliers. That is one reason any proposed changes to the price regulation framework are highly contentious. In 1999, 2012, for example, the U.S. Federal Communications Commission suspended its special access rules, to allow pricing flexibility.


In 2012, the Commission reversed course and suspended the flexibility rules for special access.


In the United Kingdom, Ofcom, the U.K. communications regulator, is considering some deregulation of services in some areas where high numbers of competitors now operate.


The U.K. market for leased line services is worth approximately £2 billion annually at the wholesale level.


BT’s wholesale SDH/PDH revenues were approximately £0.45 billion in 2014, and declined by 24 percent from the previous year.


Revenues for wholesale Ethernet services operating at bandwidths up to and including 1Gbps were approximately £0.8 billion in 2014, and changed little from 2013.


Regulated wholesale revenues for services capable of support speeds above 1Gbps (Ethernet and wave division multiplexing) were £67 million in 2014, roughly double the corresponding amount in 2013.


BT forecasts a sharp decline in TI services over the period until 2019 with 2 Mbps circuits providing the only significant remaining demand.


This is consistent with BT’s plans to shut the platform that supports sub-2Mbps circuits in 2020.


As you would guess, BT forecasts significant growth for Ethernet and WDM services, in particular for Ethernet at 100 Mbps and 1 Gbps. 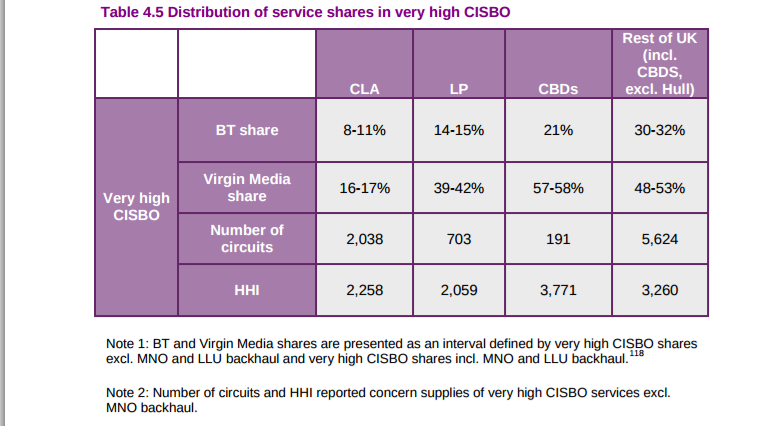 
A separate survey by BDRC Continental suggests a very high adoption of either cable modem or ADSL-based high speed access, and also high use of mobile for data connections, rather than a fixed connection. 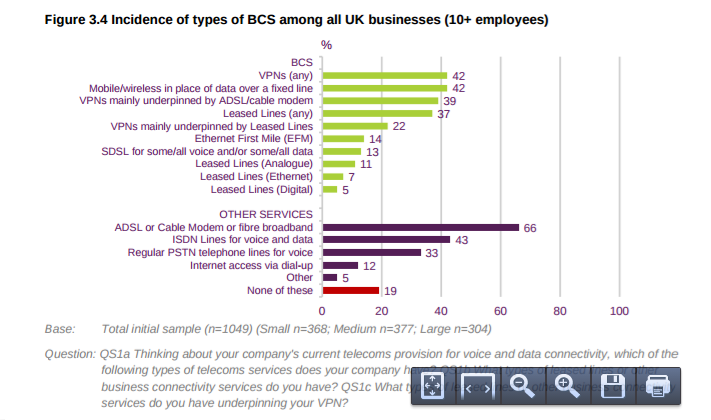 
About 76 percent of small businesses (10 to 100 employees) spend less than £50,000 on business communications services in the average yea. 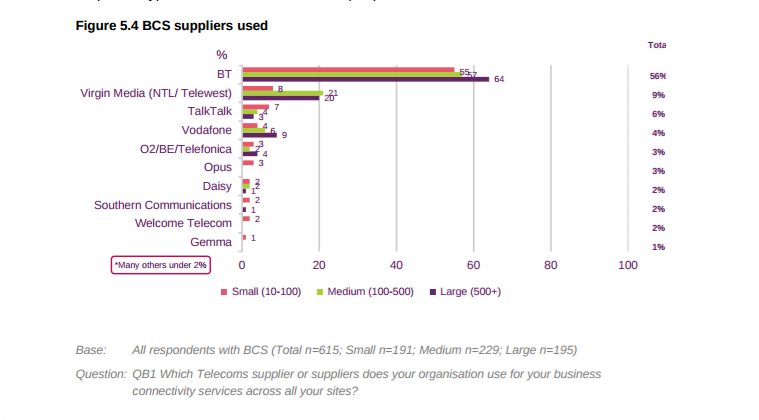