You Cannot Predict the Future

The reason we all use so much bandwidth these days: video represented 64 percent of all consumer Internet traffic and 55 percent of all mobile traffic in 2014.


And that trend is going to increase. In the U.S. market, time spent interacting with digital media has been growing on mobile, if flat on PCs and other devices, since 2008.


Of course, it sometimes helps to remember where we have come from. In 1995, the year before the Telecommunications Act of 1996, the first major reform of U.S. communications law since 1934, only about 10 percent of Americans used the Internet at all.


At the time, the key to spurring innovation and competition was thought to be allowing access into the voice business. It might sound crazy, but that’s what people thought.


The point is that some of us learned from that experience. And what we learned was that it is hard to impossible to predict the future, because the framework one is using is going to be proven wrong.


Imagine you are in 1995, and assigned to a research project, as I was, in 1995. The task was to examine the impact of a range of new technologies on communications pricing and therefore industry revenue.


Consider the challenges. This was a time when only 10 percent of people used the Internet, a time when mobile usage was about the same.


We were making forecasts three years before the founding of Google. The web browser many of us were using was “Alta Vista.” We were about a year after the creation of what became the Netscape Mosaic browser.


It wasn’t clear whether voice over frame relay, voice over ATM or voice over IP was going to become widespread, at least in the business markets.


The Telecommunications Act of 1996 had not yet been passed.


And we were just nine years after the AT&T monopoly had been broken up, creating eight firms, none of whose brand names--with the exception of AT&T-- continue to be used today. And the firm using AT&T’s name is not the former AT&T.


The main point is that our forecasts were based on an extrapolation of present trends. We could not correctly model the Internet, ubiquitous mobile adoption, smartphones, applications using Internet Protocol.


We could not model an unprecedented wave of telecom  investments and then massive destruction of communications wealth and assets, within just a few years.


The clear lesson some of us learned was that things we are not looking at are going to have more impact on the future course of things than the things we are looking at. We also learned the futility of linear forecasts. 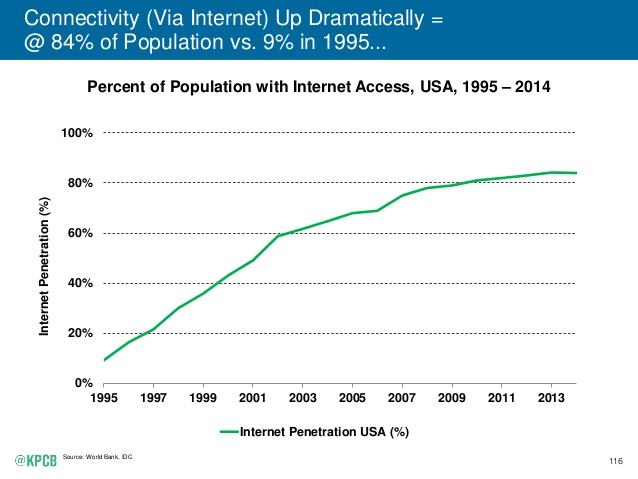