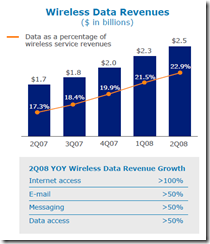 AT&T wireless data revenues grew 52 percent compared to the same quarter last year, to $2.5 billion. If the U.S. market is anything like the European market, a large portion of that growth now comes from sales of wireless data cards for PCs, though no doubt the iPhone has kicked mobile Internet and mobile email revenues into a higher orbit as well.

At the end of the second quarter, 18 percent of AT&T’s postpaid wireless subscribers had smart phones, up from eight percent one year earlier. These subscribers have average revenue per user metrics roughly double the typical level.

In the mobility segment, wireless data revenue growth now is the key, as IPTV and video are on the wired access side of the business.
at July 26, 2008