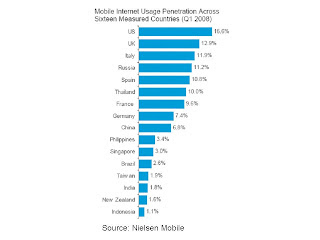 Mobile Internet has become a mass medium in the U.S. and Italian mobile markets, say researchers at Nielsen Mobile. As of May 2008, there were 40 million active users of the mobile Internet in the United States.

Perhaps more interesting is the fact that 95 million U.S. mobile users have subscribed to the service but do not necessarily use it.

According to Nielsen, 144 million (57 percent) of U.S. mobile subscribers were data users in the first quarter of 2008 (any data activity from text messaging to mobile Internet).

Some 95 million (37 percent) of U.S. mobile subscribers paid for access to the mobile Internet, either as part of a subscription or transactionally.

About 40 million subscribers (15.6 percent in May 2008) were active users of mobile Internet services, using those services at least once on a monthly basis.

It's a small point, but in recent days studies have shown that penetration of global positioning satellite services and now mobile Internet are highest in the U.S. market. Over time, that distinction means little. But it's worth keeping in mind that different services propagate at different rates in different countries and regions, often because of value drivers specific to each region, sometimes because of regulation, other times because of pricing and packaging policies.
at July 09, 2008