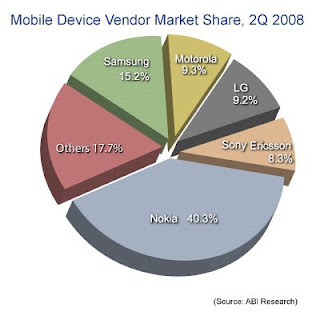 In the second quarter of 2008, tier one handset vendors enjoyed year-over-year unit shipment growth of between 15 and 22 percent, says ABI Research. ABI estimates that 301 million units were shipped during the quarter.

“If there is an economic slowdown, no one bothered to tell the mobile device buying public,” says ABI Research vice president Jake Saunders. “In particular, consumers in emerging markets in Asia, the Middle East, Africa and shrugged off inflation fears to sign up as mobile phone users.

These healthy gains in net subscriber additions are stimulating replacement and upgrade sales. In developed markets handset purchases tended to be flat, but those consumers who did purchase dug deeper and paid out more for coveted higher-end handsets and smart-phones.”

In terms of market share, Nokia has passed the 40 percent threshold for the first time (40.3 percent). Samsung secured second place with 15.2 percent, while Motorola barely managed to keep ahead of LG with its 9.3 percent versus LG’s 9.2 percent, and both edged out Sony Ericsson (8.3 percent). There is a distinct possibility that LG might overtake Motorola by the end of 3Q 2008, putting Motorola into fourth place, ABI researchers say.