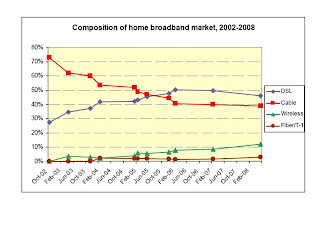 Satellite broadband now is the growth focus for providers such as Hughes Network Systems and WildBlue, and the stated opportunity often is said to be rural users as well as residents of suburban or urban areas not yet wired either for digital subscriber line or cable modem services.

According to data from the Pew Internet & American Life Project, that might not be completely correct. Though 16 percent of respondents to a recent Pew survey reported they have satellite broadband, so did 10 percent of urban users as well as 10 percent of suburban users.

In the separate video entertainment business, one can make a reasonable argument that availability of the wired alternatives is less an issue, as the satellite providers compete not only on "availability" but on image quality and program diversity.

Satellite broadband providers do not have that opportunity, as satellite generally offers speeds slower than DSL and cable modem services, for slightly to meaningfully higher prices. Satellite services clearly win when there is no other alternative but dial-up service.

Nor does satellite fare as well on price in wired areas. Both cable modem and DSL prices have dropped since 2004, Pew reports. The price drops arguably have been highest for "value" priced packages, as new "premium" services featuring more speed continually have been added at the high end.

Still, Pew researchers report that 62 percent of surveyed dial-up users say they "do not want" broadband. Overall, the remaining pool of dial-up users iucludes just about 36 percent of users who say they are willing to switch to broadband. One expects the base of resisters will continue to dwindle over time.
at July 23, 2008