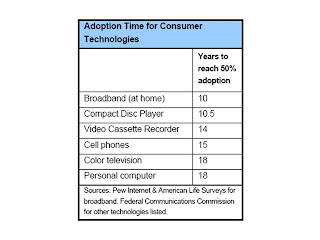 Americans are an impatient bunch, and pundits are even more unforgiving. We tend to want everything now, and seem to tire of complicated problems that take a while to solve. Consider broadband, which continues to be seen as a problem in some quarters. There still are calls to "national action" to fix the problem. History suggests there is no problem to be fixed.

Broadband reached 50 percent penetration of the consumer market in 10 years--faster than any number of other highly-popular consumer electronics innovations that do not seem to require "national action" to fix. The popular compact disk player took 10.5 years to reach 50-percent penetration. VCRs, another popular innovation in its day, took 14 years to reach half of homes.

Technology also seems to be the reason why any reasonable end user will tend to say their choices of devices, services, applications, as well as the prices they pay for those products and services, are measurably, sometimes dramatically lower these days than before the Telecommunications Act of 1996, which some contestants deem to be a failure.

Perhaps it is worth observing that end users--consumers and businesses--are far better off today than they were before the Act. That some contestants have fared better than others is undeniable. So perhaps another observation is in order. Despite any failures of the Act, users universally have more choices, more variety and lower prices in just about every segment of communications today, than they did in 1995.

So perhaps what has happened is that technology and open markets have outstripped all the particular policy regimes in a decisive way. It might be fair to say that success has occurred despite the Act. That there are many unhappy contestants is undeniable. But if the objective was an explosion of choices, better applications and lower prices, that has occurred.

That isn't to say a similar outcome couldn't have been obtained under some other set of policies. European regulators have pursed different courses. In a few cases, those different policies have resulted not only in higher broadband penetration, but also have provided higher bandwidth at lower prices. Japan and Korea come to mind.

Still, it probably also is worth noting that both those nations have domestic business cultures quite distinct from those of Europe, Africa, North America, South America and the rest of Asia. State-directed investment plays a significantly different role than elsewhere, and both nations are relatively compact and feature high-density housing. Both those factors, plus state-directed investment, mean both nations can do things that would be difficult elsewhere.

So it is true that U.S. broadband does not have the highest bandwidth or the lowest price among all nations. Those honors are held by small countries, generally with high-density populations (which means short access loops), or vigorous state-sponsored investment. In broadband, as elsewhere, scale makes a difference.
at July 08, 2008

I think this view lets policymakers off the hook too easily. The point is not that broadband is being adopted faster than other innovations, but that the U.S. is falling on so many key metrics.

Do you think our pure market approach will ever generate the level of investment that will catch the U.S. back up to the leaders? Or do you think it doesn't matter? My view is that the answer to both these questions is "no."

Our national performance is not a failure of the providers -- they are maximizing value to owners/shareholders under the rules we have created through our policymakers. If we think advanced broadband is an important lever for our social/educational/economic/health welfare, then we can no more abrogate responsibility to pure private capital in an almost purely open marketplace than we do for roads, power distribution, water, sewage or any other right-of-way-based infrastructure.

We have a different set of opportunities and challenges with broadband -- Although with the increasing separation of power generation and distribution, we may see more similarities there in the future as well.

Understood and well argued. I suppose my point was that irrespective of policy, the issue is whether there is a "problem" or not. My point in citing those other instances of user adoption was simply to point out that, looked at historically, there might not be a "problem" to solve, any more than any of those other innovations represented "problems" at similar stages of adoption.

There was a point when U.S. use of wireless and text messaging lagged far behind other nations as well, and yet this problem no longer exists. In part because it takes much more time to "wire" a continent than a smaller country, in part because users might not see the value, U.S. adoption rates often lag other nations at first.

That does not mean there actually is a "problem" to be solved. Based on the historical record, one might argue the "problem" of broadband adoption will be solved faster than other problems of similar sort.

U.S. policy might have taken a different route than elsewhere. That's a tactical measure, I'd argue. The goal is ubiquitous uptake, and so far there is no reason to believe this will not happen, as a matter of course. Time will tell.